Large banks including JPMorgan Chase, Wells Fargo, NatWest and Goldman Sachs will feel obliged to continue lending to energy companies at current levels even if there are good risk management reasons to cut back, said Raskin, who has also served as a US Federal Reserve governor. Her nomination to return to the Fed to head banking supervision was blocked by Republicans earlier this year.

Raskin, now at Duke University, is concerned because the banks cited their lending to energy companies as proof they are not hostile to fossil fuel in official letters to the state of Texas earlier this year. The Texas comptroller Glenn Hegar then left them off the official list of financial institutions that the state has earmarked for divestment. BlackRock and nine European asset managers and banks were not so lucky.

Current lending levels will effectively become a “floor” for future loans for fear of angering Texas and other conservative states that have enacted laws targeting investing based on environmental, social and governance factors, Raskin said. “These laws are, in essence, forced fossil fuel financing laws,” she said.

“We could see a decoupling of underwriting from risk management,” she said. “Corners will be cut and, if examiners don’t notice, this then can become a financial stability problem. It’s not just going to happen at one large bank; it could be the same dynamic with many of them.

“The cocktail of loose underwriting, coupled with inappropriate pricing, insufficient insurance and collateralisation, isn’t a particularly tasty one when you have missing the ingredient of internal risk management processes.”

Bank supervisors at the regional Fed banks, the Federal Deposit Insurance Corporation and the Office of the Comptroller of the Currency “have got to kick the tyres on what these laws could do. Without that, banks could find themselves running haphazardly,” she said.

There is precedent for Raskin’s concerns. In 1984, Continental Illinois became what was then the largest US bank rescue largely because of its exposure to bad oil and gas loans made during the 1970s and 1980s energy boom in Texas and Oklahoma. Lending standards were relaxed during the run up in oil prices and Continental Illinois failed to react when prices started to fall in 1981.

Anti-ESG pressure is already starting to affect the way some banks are addressing climate change. Mark Carney, the former Bank of England governor, conceded last week that tough new targets on coal funding being proposed by a UN-led emissions standards body had been rolled back after banks objected to them over fears they would be sued.

Raskin said there is a risk that regulators will exacerbate the dangers posed by the anti-ESG laws if they fail to focus on their impact on risk management. “The examiners’ first instinct is to not see the underlying dangers to risk management because they will see these laws as politically motivated. Any law these days related to climate is one that examiners will note and then run the other way,” she said.

The Fed is starting to delve into the financial risks posed by climate change. It announced last week that the six largest US banks — Bank of America, Citigroup, Goldman Sachs, JPMorgan Chase, Morgan Stanley, and Wells Fargo — will participate in a pilot programme that will allow regulators to measure the impact of various climate scenarios on specific portfolios and business lines. 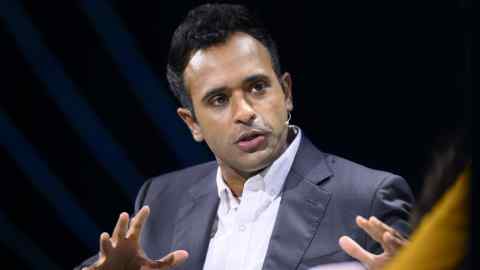 Michael Barr, who replaced Raskin as Joe Biden’s pick to lead supervisory matters at the Fed, said in his first public remarks since assuming that role that the central bank’s “mandate in this area is important, but narrow, focused on our supervisory responsibilities and our role in promoting a safe and stable financial system”.

For Raskin, the Fed’s congressionally mandated focus on achieving price stability and a healthy labour market does limit its ability to deal head-on with an issue like climate-related risks. But over time, the central bank will need to push further in that direction, she said.

One area Raskin said the Fed should focus on is retooling its models as it relates not only to climate considerations, but also to broader shifts in the foundations of the economy owing to the pandemic.

“When you have these major dislocations in an economy, it’s a good opportunity to refresh,” she said. Regressions in models are based on past data and what we’re trying to do is model an economy that in several ways — including the effects of climate — may not be operating the way it has in the past.”

My memories of Gorbachev in the 1980s