Roger Federer has announced his retirement from tennis following a string of injuries, ending the career of one of the most popular and successful players in sporting history.

“As many of you know, the past three years have presented me with challenges in the form of injuries and surgeries,” he said. “I’ve worked hard to return to full competitive form. But I also know my body’s capacity and limits, and its message to me lately had been clear.”

“I will play more tennis in the future, of course. Just not in the Grand Slams or on the tour,” he added.

The Swiss player broke into the top ranks of tennis in 2003, winning his first Grand Slam title at Wimbledon that year. He went on to win the championship another seven times, part of his haul of 20 Grand Slam victories — the third highest in the open era. These successes helped make him one of the top earners in sport.

“Where do we begin? It’s been a privilege to witness your journey and see you become a champion in every sense of the word,” the Wimbledon championships said after the announcement. “We will so miss the sight of you gracing our courts, but all we can say for now is thank you, for the memories and joy you have given to so many.”

Federer’s intense rivalries with Rafael Nadal and Novak Djokovic helped power interest in tennis around the world over the past two decades.

“We pushed each other, and together we took tennis to new levels,” he said of his competitors.

His decision to quit the game comes less than two weeks after Serena Williams, the most successful women’s player in the open era, played her final competitive match at the US Open. 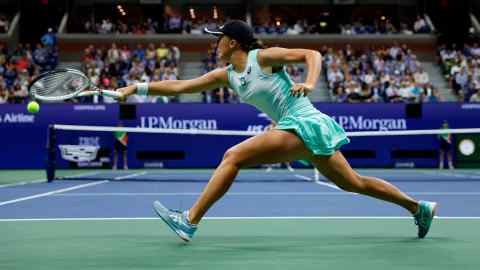 Federer entered the top 50 rankings in the summer of 2002 and stayed there until June this year. He became the men’s number one player in February 2004, a spot he would retain unbroken until August 2008 and later return to numerous times.

“Roger’s impact on tennis and the legacy he’s built, are impossible to overstate,” said ATP chair Andrea Gaudenzi. “He spearheaded an incredible new era of growth and elevated the popularity of our sport. Few athletes have transcended their field in such a manner.”

His last — and now final — Grand Slam win came in 2018 at the Australian Open. Since then he has struggled with injury. The Laver Cup in London next week will be his final appearance on the ATP circuit.

“I consider myself one of the more fortunate people on earth. I was given a special talent to play tennis and I did it at a level that I never imagined, for much longer than I ever thought possible,” he said. “I have laughed and cried, felt joy and pain, and most of all felt incredibly alive.”

admin - October 2, 2022
0
Failed Portland Democrat Mayor Ted Wheeler appeared to laugh and scoff at a woman during a virtual city council meeting when she raised...

admin - October 2, 2022
0
Israel and Lebanon are edging towards a US-brokered agreement to defuse a dispute over their maritime border that has been a long-running source...

How parents can spot the signs of anxiety in their kids