Turkey’s business community is “culpable” for the worsening economic crisis because of its failure to speak out against President Recep Tayyip Erdoğan and his unorthodox policies, one of the country’s leading opposition figures has said as he urged corporate executives to show “courage”.

In an attack on the business world, Ekrem İmamoğlu, the mayor of Istanbul, lamented the fact that the nation was suffering from “the most important economic crisis in Turkey’s history”, with inflation running at more than 70 per cent and poverty soaring, and yet company leaders were failing to speak out.

Erdoğan, a staunch opponent of high interest rates, has repeatedly ordered the central bank to slash borrowing costs in recent years despite rising inflation. The president and senior Turkish officials justified the latest round of aggressive rate cuts, in the final months of last year, by arguing that they were pursuing a “new economic model”. But the approach has caused the currency to plunge against the dollar and unleashed spiralling inflation.

İmamoğlu, seen as a possible challenger to Erdoğan in upcoming presidential elections, voiced sympathy for company executives who have largely been silent as the country has lurched from one crisis to another, acknowledging that many feared potential retribution for criticising the Turkish leader.

“They are frightened that they might face an investigation into their accounts, that they could be subject to unlawful trials or that they could face some other intervention,” İmamoğlu said.

Some of the country’s largest conglomerates have faced tax fines, cancelled tenders and criminal investigations after perceived slights against Erdoğan, who has ruled Turkey for almost 20 years.

But the Istanbul mayor warned that the economy was reaching “the end of the road”.

İmamoğlu secured a stunning victory for the Turkish opposition in 2019 by winning control of Istanbul, ending 25 years of dominance by Erdoğan’s ruling Justice and Development party (AKP) and its political forebears in Turkey’s largest city.

He was forced to fight the election twice after Erdoğan refused to accept his original, narrow victory against the AKP candidate but won the rerun by a landslide.

The 52-year-old, who is facing what he describes as a politically motivated trial that could see him banned from politics, suggested he could be removed from office if Erdoğan wins again in elections that must take place before June 2023 — just as the Turkish president has removed dozens of elected mayors from their posts in Kurdish-majority cities in the country’s south-east.

“They have done many things that would never enter our minds, that we wouldn’t believe or that we would say would never happen,” he said. “A system with the mentality that it can cancel an election can do anything.”

Turkish opposition parties, which have formed an alliance in an unprecedented show of unity, have yet to decide on their joint presidential candidate to take on Erdoğan.

While there is growing momentum behind Kemal Kılıçdaroğlu, the leader of İmamoğlu’s Republican People’s party (CHP), polls have consistently shown he is less popular than İmamoğlu and the mayor of Ankara, Mansur Yavaş, another CHP member. 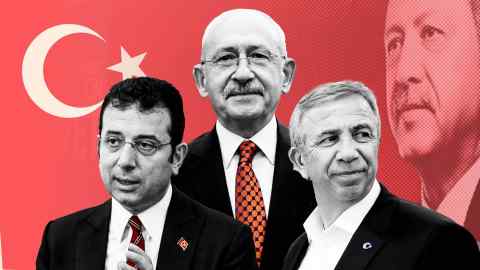 The Istanbul mayor, who has publicly supported Kılıçdaroğlu’s candidacy but has not ruled himself out as a contender, said it was “not right” to get into a debate about the ability of Kılıçdaroğlu to win when the election timing remained unclear. But he said that choosing the right candidate would be “very, very important”.

With opinion polls suggesting Erdoğan’s popular support is at an all-time low but also indicating that some voters lack faith in the opposition, the Istanbul mayor said the outcome of the vote was in the hands of his party and its allies. “It is us who can beat the ruling party and us who can lose,” he said. “At this hour, the government cannot win.”

He cautioned that Erdoğan would suffer a “huge defeat” at the hands of the electorate if he lost and sought to rerun the vote, as he had in Istanbul. “It is the 86mn people in this country who give the election [outcome] to the person who deserves it,” he said. “No one can obstruct this — Erdoğan included.”

Travel adventures to the edge of the world

Spain swelters as temperatures soar above May average By Reuters