A Russian diplomat has resigned in protest against Moscow’s invasion of Ukraine, describing himself as “ashamed” of his country in a rare rejection by a government official of President Vladimir Putin’s war aims.

Boris Bondarev, an arms control adviser to the Russian UN mission in Geneva, made the highly critical comments in a statement posted on social media accounts.

“Long overdue, but today I resign from civil service. Enough is enough,” he wrote.

“For 20 years of my diplomatic career I have seen different turns of our foreign policy, but never have I been so ashamed of my country as on February 24 of this year,” he said, referring to the date that Russia invaded Ukraine.

Bondarev’s statement, which also criticised Russia’s veteran foreign minister Sergei Lavrov, said the foreign ministry was riven with “lies” and was no longer about diplomacy. Instead, he wrote, “it is all about warmongering, lies and hatred. It serves [the] interests of [the] few.”

Speaking to the Financial Times, Bondarev confirmed he had resigned and said he did not think he could return to Russia for the time being, for fear of repercussions.

“It became obvious that our government was doing the wrong things, absolutely not in the interests of the country or the society, quite the opposite,” he said, speaking by phone. “I didn’t want to have anything to do with that.”

“As a staff member I carry some sort of responsibility for all of this. So I decided that was it,” he said. He added that he knew of “quite a significant” number of people who had already resigned from jobs in Russian diplomacy but had done so without making any public statements.

Fear of change and of possible repercussions keep many others in their jobs, even if they might disagree with the war as well, Bondarev said.

Though he felt he had been “putting up with nonsense” at work for some time, Bondarev said he might have stayed in his job had it not been for the invasion, after which he felt it was time “to signal, are you a person or what are you”.

The office of the Permanent Mission of the Russian Federation to the UN did not immediately respond to a request for comment. 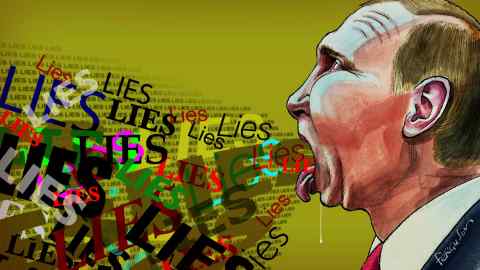 Writing in his resignation statement, Bondarev said that his former boss, foreign minister Lavrov, had gone from being a “professional and educated intellectual . . . held in high esteem, to a person who constantly broadcasts conflicting statements and threatens the world . . . with nuclear weapons!”

“I studied to be a diplomat and have been a diplomat for 20 years. The ministry has become my home and family. But I simply cannot any longer share in this bloody, witless and absolutely needless ignominy,” he wrote.

Bondarev said the war was also a “crime against the people of Russia, with a bold letter Z crossing out all hopes and prospects for a prosperous free society in our country”. The letter Z, used on Russian military vehicles in Ukraine, has become a nationalist symbol of backing for the invasion.

France struggles to overcome its resistance to wind farms