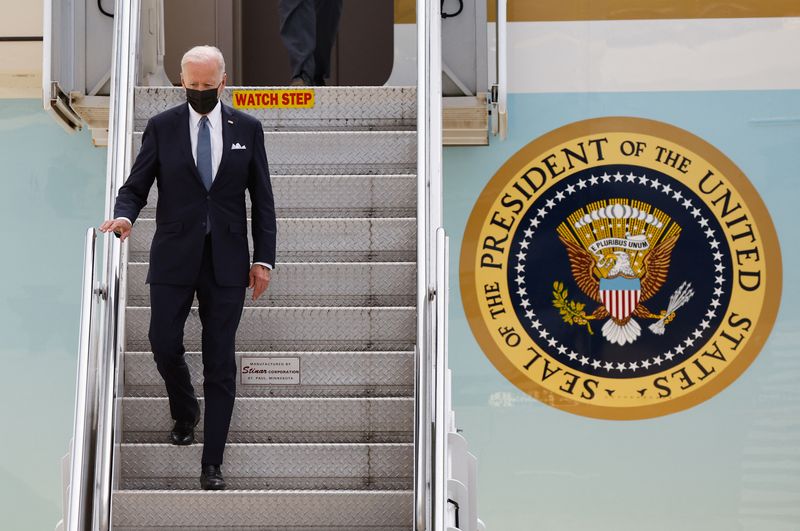 © Reuters. U.S. President Joe Biden arrives aboard Air Force One at Yokota U.S. Air Force Base in Fussa, on the outskirts of Tokyo, Japan May 22, 2022. REUTERS/Kim Kyung-Hoon

TOKYO (Reuters) – U.S. President Joe Biden, in Japan to launch a regional economic plan to counter China and reaffirm ties with a key Asian ally, began his visit on Monday by meeting with Emperor Naruhito.

The cornerstone of Biden’s two-day visit, which includes meetings with the leaders of Japan, India and Australia, the “Quad,” will be the rollout later on Monday of the Indo-Pacific Economic Framework, a broad plan providing an economic pillar to its engagement with Asia.

Biden arrived at the palace, where he was met by Naruhito, and the two exchanged greetings before they were ushered inside, both wearing white masks.

Biden’s call on the Emperor will be followed by talks with Japanese Prime Minister Fumio Kishida in which the two nations are expected to discuss Japan’s plans to expand its military capabilities and reach in response to China’s growing might.

The two key allies are also expected reconfirm their close ties in the face of Russia’s invasion of Ukraine, agreeing that unilateral changes in the status quo by force are unacceptable.

Worries are growing in Asia about an increasingly assertive China, particularly in light of its close ties to Russia, and tensions in particular have been rising around Taiwan, which China considers a renegade province.

North Korea and regional issues will also be on the agenda, with Biden later on Monday scheduled to meet with the families of Japanese who were abducted years ago to train spies in North Korea.

admin - December 4, 2022
0
Shanghai eased some of its Covid restrictions, joining other top-tier Chinese cities as authorities accelerate a shift toward reopening the economy after thousands...

The joy of living off the clock