The Australian Greens, which could hold the balance of power in the country’s upper house after Saturday’s election, have called for a halt to all new gas and coal projects, setting up a collision with the recently elected Labor government and the large fossil fuel export industry.

The Greens secured their best result in Australia’s general election on Saturday, winning at least three seats in the lower house and as many as 12 of 76 seats in the Senate, which could allow it to block Labor’s legislation if it was not supported by the conservative opposition.

It was not yet clear on Monday whether Labor would have an outright majority in the lower house. If it does not reach the 76 seats needed to govern on its own, the party will need to negotiate with the Greens or pro-climate independents on all non-bipartisan legislation.

Adam Bandt, the Greens’ leader, said preventing all new coal and gas developments would be the party’s priority in negotiations with Labor.

“The Greens will be demanding climate targets in line with the science for a safe climate, that meet our Paris commitment and don’t spell the end of the Great Barrier Reef,” he said on Monday.

“But the first job is to stop making the problem worse. Labor’s targets don’t even take into account the 114 new coal and gas projects in the pipeline. You can’t put out a fire while you’re pouring petrol on it.”

Anthony Albanese, who was sworn in as prime minister on Monday, vowed in his victory speech to end the “climate wars”, a reference to a decade of ideological battles over global warming during which Australia become an international outlier on climate policy.

Albanese promised to implement stronger climate policies than his predecessor Scott Morrison, including a more ambitious 2030 emissions reduction target and an emissions trading scheme and to spend billions of dollars upgrading electricity infrastructure.

But he has said Labor, which gained ground in coal mining areas including the Hunter valley, would not prevent Australia’s large coal and gas export industry from developing more coal mines and gasfields.

The Greens’ policies sit to the left of Labor, which categorically ruled out any deal with the smaller party during its election campaign.

If the Greens demands are successful, it would set up a battle with the gas industry, which is pushing for more gasfields to be opened up to serve growing global demand following Russia’s invasion of Ukraine and the rise in European demand for non-Russian gas.

On Sunday, the Australian Petroleum Production and Exploration Association urged “any new administration to continue to recognise the critical role of gas in the future decarbonised energy mix and the development of our region, as well as focusing policy efforts on improving the competitiveness of the nation’s investment environment”. 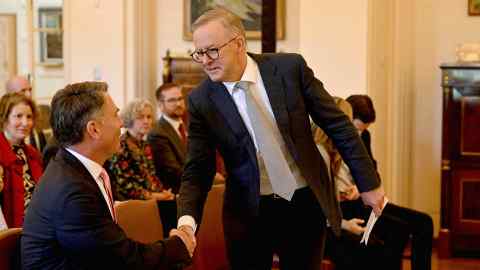 Woodside Energy, the Australian oil and gas company, and US supermajor Chevron, which are big producers of liquefied natural gas in Australia, told the Financial Times last week that they intended to keep pushing for more gasfields to be opened.

“We advocate for the role of gas in a decarbonising world, and we think it’s important that we continue to provide the world with safe, reliable, affordable energy as we go through this decarbonisation journey,” Woodside chief executive Meg O’Neill said.

Both Woodside and Chevron are developing new gasfields, which would be cancelled under the Greens’ proposal.