Big Pharma is offering to reserve vaccines, medicines and tests for low-income nations in preparation for the next pandemic in exchange for a fee and a commitment that governments not impose restrictions on trade.

The International Federation of Pharmaceutical Manufacturers and Associations argues the mechanism would enable the rapid distribution of supplies to low- and middle-income nations in the event of a new Covid-19 variant or the next pandemic.

But the initiative faces resistance from critics of Big Pharma, who argue that waiving intellectual property rights on medicines and localising manufacturing in Africa is a better way to ensure equality of access to vaccines, treatments and diagnostics in the developing world.

Some civil society groups have criticised Moderna, Pfizer and BioNTech, which made the effective Covid vaccines based on messenger RNA technology, for rushing to sign supply deals with rich nations ahead of Covax — a body set up to supply low income countries.

Public Citizen said the Ifpma proposal would provide a “corporate subsidy” to the established industry and act against efforts to democratise vaccine manufacturing by basing more production in Africa and sharing intellectual property.

The Ifpma proposal, which is contained in a policy document seen by the Financial Times, says the scheme would only work if rich nations commit to allow trade in a future crisis and eschew the type of “vaccine nationalism” and export bans that blighted the world’s initial response to Covid.

India halted exports of vaccines for five months in 2021 when it suffered a wave of Covid infections. The US invoked wartime powers that compelled private companies to fulfil domestic contracts ahead of other orders, and the EU imposed export controls at the height of the pandemic.

“Restrictions in place during Covid-19 undermined the ability to manufacture and deliver vaccines and treatments equitably,” said the paper, which calls on governments to support “predictable, increased demand” from underserved countries to support manufacturing capacity between pandemics.

“When we hit bumps and glitches with some vaccines — either because of export bans, delays in development, or challenges in scaling up [during this pandemic] — the companies with the most sought-after vaccines were oversubscribed by rich countries,” said Thomas Cueni, Ifpma director-general.

“A willingness from innovative pharma companies to put aside part of their production upfront for vulnerable populations (as determined by health authorities during pandemics) in lower-income countries would be a real game changer.”

The request from Ifpma comes as policymakers gather at the WHO World Health Assembly, which begins Sunday, to discuss how to strengthen pandemic prevention, preparedness and response and learn from the mistakes made in tackling Covid-19. This includes efforts at the G20 to establish a Pandemic Preparedness and Global Health Security Fund hosted at the World Bank, which would aim to disburse up to $10bn a year over the next five years to boost the capacity of health systems in low- and middle-income nations.

So far just $1bn has been pledged to the fund, which is prompting concerns in industry that “pandemic fatigue” and other geopolitical crises, such as the Ukraine war, could dent governments’ resolve to finance pandemic preparedness.

The Ifpma proposal has attracted support from the Coalition for Epidemic Preparedness and Innovations and Gavi, the Vaccine Alliance, which are co-leaders of Covax. Both are concerned that the world remains ill-prepared to tackle the next Covid variant or a new pandemic. 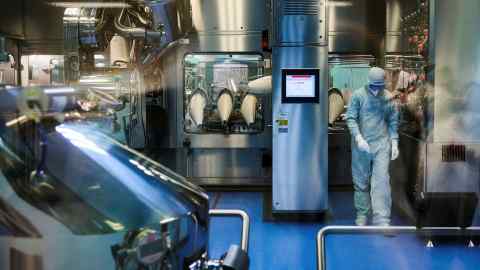 Dr Richard Hackett, Cepi chief executive, said reserving vaccines for low-income nations could potentially help to tackle a problem Covax faced in the early days of the pandemic when it was unable to sign advanced purchase agreements for vaccines with industry because it had no funds.

“With this type of financing mechanism in place then industry partners could then say we can reserve this portion or some reserve [manufacturing] capacity for procurement for global equity,” he said.

Dr Hackett said it would be better to have a more equitable distribution of pharmaceutical manufacturing across middle- and low-income nations, but that the proposal was a good interim solution until this is achieved.