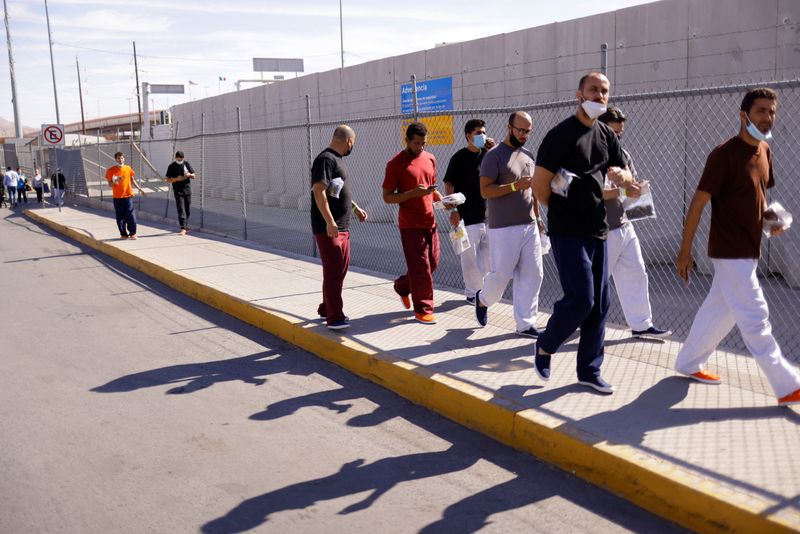 © Reuters. FILE PHOTO: Cuban migrants, who were expelled from the U.S. and sent back to Mexico under Title 42, walk near the at the Lerdo Stanton International border bridge, in Ciudad Juarez, Mexico May 3, 2022. REUTERS/Jose Luis Gonzalez

By Kristina Cooke and Mica Rosenberg

(Reuters) -U.S. authorities were blocked by a federal judge on Friday from lifting COVID-19 restrictions that empower agents at the U.S.-Mexico border to turn back migrants without giving them a chance to seek asylum.

The nationwide injunction issued by U.S. District Judge Robert Summerhays in Louisiana means the restrictions, which were set to end on May 23, will remain in place across the border as the litigation proceeds, unless a higher court overturns the ruling. The Department of Justice (DOJ) said it intends to appeal.

The pandemic restrictions, known as Title 42, were put in place in March 2020 during the administration of former Republican President Donald Trump, an immigration hardliner. Health authorities at the U.S. Centers for Disease Control and Prevention (CDC) said at the time it was needed to curb the spread of the coronavirus in crowded border facilities.

Since then, more than a million migrants apprehended at the border have been rapidly expelled to Mexico or other countries under the order, often within hours of being caught.

Judge Summerhays, a Trump appointee, said keeping the Title 42 order in place “would serve the public interest” and that a nationwide injunction was necessary given the ability of immigrants crossing the border to move freely from one state to another.

Democratic President Joe Biden’s decision to lift Title 42 has faced criticism from Republicans and some members of his own party, concerned that ending the expulsions would push a record number of migrant crossings even higher.

Medical experts, the United Nations and other Democrats have said the expulsions put vulnerable migrants in danger and were not based on science.

The White House said it disagreed with the court’s ruling, but would comply with it pending the DOJ’s appeal.

“The authority to set public health policy nationally should rest with the Centers for Disease Control, not with a single district court,” White House Press Secretary Karine Jean-Pierre said in a statement.

Last month, the CDC said Title 42 was no longer needed to fight COVID-19 due to the increased availability of vaccines and other tools.

But a coalition of two dozen states led by Arizona, Louisiana and Missouri, all with Republican attorneys general, sued to prevent the Biden administration from ending the policy.

The judge found the states had a “substantial likelihood of success” regarding their claim that the CDC failed to take proper regulatory steps when it moved to terminate Title 42. Arizona Attorney General Mark Brnovich applauded the ruling as a “significant win.”

The decision leaves in limbo thousands of migrants who have been waiting in Mexican border cities for the order to end so they can begin the process of seeking asylum in the United States. On Friday, a group of migrants gathered outside the U.S. consulate in Tijuana to voice their concerns.

“We’re here with our vaccination cards and negative COVID-19 tests to prove that we don’t have this sickness,” said Mexican asylum seeker Juan Carlos Guzman, who said he had fled the violence-torn state of Guanajuato after an organized crime group assassinated his son.

Advocates quickly condemned the judge’s decision. A separate court ruling blocks the Biden administration from expelling families to places where they could be persecuted or tortured.