Early on in the pandemic, Clair Battaglino, a former primary school teacher in Hackney, east London, returned home from abroad to an “almighty traffic jam” snaking through her neighbourhood.

She took a bus to the Barbican in the City of London, but even getting through the first set of traffic lights took ages. The cause was road closures, implemented under temporary and emergency traffic orders to create a low-traffic neighbourhood (LTN). These were designed to encourage travel by bike or foot instead of public transport during the lockdowns.

Tensions over London’s LTN schemes led to protests after motorists were fined, businesses suffered late deliveries and car-reliant elderly and disabled residents were cut off from care.

Battaglino is concerned that displaced traffic is increasing pollution, adversely affecting children at local schools and nurseries. She also says her own breathing has suffered because of the increased congestion.

“It was shocking. You just think, who is this helping?” she says. Battaglino joined anti-LTN campaign group Hackney Together and stood in last year’s mayoral elections. She was also an independent candidate for Hackney Central in this month’s local elections.

Many had anticipated that the local elections would be a kind of referendum on the use of LTNs. But those promising to scrap the schemes for the most part failed to win seats. Candidates in Dulwich Village, south-east London, where opposition was among the fiercest, failed to win over voters, while the two anti-LTN candidates in Islington won fewer than 1,000 votes. Battaglino secured 214 votes.

The Centre for London think-tank says that after this poor showing, councils may be emboldened to roll out further low-traffic schemes, calling the LTN issue “the dog that didn’t bark”. According to research by Redfield & Wilton Strategies, 47 per cent of Londoners support their introduction, with only 16 per cent opposing it.

But what many people may not realise is that if the UK is to take its net-zero goals seriously, measures such as LTNs are just the start, says Professor Lorraine Whitmarsh, an environmental psychologist and director of the Centre for Climate Change and Social Transformations (CAST).

A report by the International Energy Agency states that behavioural change will account for nearly two-thirds of the energy reduction needed to reach the net-zero goal. “The sort of things that are going to be most effective to get to net zero will involve quite a significant degree of invasion in people’s lifestyles,” says Prof Whitmarsh. “Unfortunately, the public isn’t really aware of how much things are going to change.”

According to CAST, most emission reductions can be made in transport, diet and household energy use. If the UK adopted the World Health Organization recommendations for diet, for example, it could reduce greenhouse gas emissions from food by nearly a fifth.

The UK government has already introduced a £5,000-per-household grant to encourage the installation of electric heat pumps by homeowners. It has also made a start on reducing car use with a £2bn “active travel” fund to promote walking and cycling, now encompassing LTNs, School Streets and expanded cycle lanes.

Policymakers in mainland Europe are adopting similar measures: traffic-filtering initiatives come in different guises to the UK’s LTNs and have been implemented with varying degrees of success. Barcelona has superilles, or superblocks, which turn road intersections into public parks, while Berlin is introducing Kiezblocks, which protect neighbourhoods from through-traffic by using bollards and one-way streets.

Paris mayor Anne Hidalgo sought to ban through-traffic across the city centre by 2022, but the plan has been delayed until 2024, following opposition from residents who complain that cyclists have taken control of the roads.

Felix Weisbrich, head of roads and green spaces on Berlin’s Friedrichshain-Kreuzberg district council, is in charge of rolling out the area’s latest Kiezblock scheme to turn the popular Bergmannstrasse neighbourhood into a playground for pedestrians and cyclists. “If you change the system, you change the way they organise their mobility. And that takes time,” he says. In his experience, it takes three to six months for the complaints to stop. 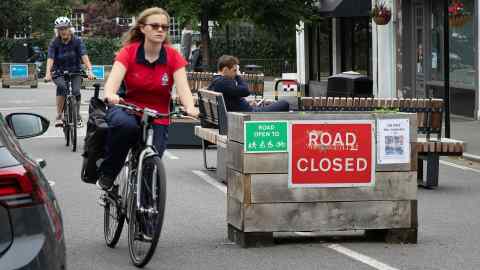 “Cities that are built for cars will be used by cars,” he says. “If we build other infrastructure, it will be used.” Pro-LTN councillors in London may be pleased to hear Weisbrich refer to the UK capital as his “shining star” of low-traffic policy.

In Barcelona, a modelling exercise led by the Barcelona Institute for Global Health (ISGlobal), which explored the potential effects of 503 superblocks, predicted the city could avoid 667 premature deaths a year, thanks to a reduction in air pollution. The projections also showed the average life expectancy for the Barcelona adult population would increase by 200 days.

“You’re trying to take something away from someone that they are used to, that they think is quick and comfortable,” says Mark Nieuwenhuijsen, director of the urban planning, environment and health initiative at ISGlobal. “And they don’t want to give it up, unless you give a better alternative.” An exemplary case for active travel in Europe is Copenhagen, where about half of trips to work or school are by bike. The city plans to go carbon-neutral by 2025.

But not even Copenhagen got it right first time. In 2008, the city introduced its first traffic-calmed streets in the Nørrebro neighbourhood, without properly consulting shop owners. This caused consternation, says Camilla van Deurs, Copenhagen’s city architect. Over several years the types of shops in the area changed, to more recreation-orientated businesses. In effect, it gentrified.

Battaglino says LTNs in Hackney only benefit middle-class people who live in leafy residential streets that are closed to through traffic.

The Federation of Small Businesses says many of its members in neighbouring Islington have reported a reduction in footfall and problems with deliveries as a result of LTNs, at a time when businesses are already struggling because of the pandemic. Though Copenhagen has reduced its CO₂ by 70 per cent since 1990, many of the measures undertaken, such as a district heating system and transition to wind power, were “invisible” to citizens, says van Deurs. “To make the last 430,000 tonnes that we’re short of our CO₂ goal, we are asking everyone to contribute . . . And that’s challenging.”

In his introduction to the UK government’s net zero strategy, published last October, prime minister Boris Johnson wrote that reaching the goal would not require any sacrifice: “We can build back greener, without so much as a hair shirt in sight,” he said.

“[The government] has said it is not keen to change lifestyles and impact people’s behaviours too much,” says Prof Whitmarsh, and that, at most, it will increase the use of electric vehicles and heat-pumps. “But we know this is vastly inadequate and we are going to need further behaviour change measures.”

admin - November 29, 2022
0
The London Metal Exchange claims that $20bn of margin calls would have led to the simultaneous bankruptcy of multiple clearing houses and created...

admin - November 29, 2022
0
Ingo Rademacher, the actor who portrayed Jasper “Jax” Jacks on the ABC soap opera General Hospital, will be given the “Legendary” award from...