Could buying Twitter be an act of hubris that jeopardises Elon Musk’s startup empire?

In the two weeks since the social media company’s board accepted his $44bn offer, there are concerns that the world’s richest man is biting off more than he can chew. They have ranged from whether he will be stretched too thin in taking on another company, to risks from mortgaging or selling some of his large personal Tesla stake, and worries about a political backlash over the “free speech” abolutism he has promised at Twitter.

In a wide-ranging interview at the FT’s Future of the Car Summit on Tuesday, Musk swatted away questions about whether Twitter will weigh on his wider business interests while he grapples with the huge issues confronting electric car maker Tesla.

They included the stresses that have come from managing what he described as the fastest-growing manufacturing company in history amid the severe global supply chain crisis and straddling the widening geopolitical gulf between the US and China.

Musk pointed to habits already designed to handle brief and intense bursts of work, as his restless focus shifts between his companies’ most pressing problems. He said that two nights before appearing at the FT event to give his first interview since reaching the deal to buy Twitter, he had worked through the night and the next day dealing with one such problem.

He rejected the suggestion that owning Twitter would add to the risks at his current businesses. Asked if his controversial plans for the network might rebound somehow on Tesla itself, his response was: “I am confident we will be able to sell all the cars we can make.”

The Tesla boss has talked at length this year about dealing with a situation in which “demand is exceeding production to a ridiculous degree”. On Tuesday, he hinted at a new idea: temporarily cutting off new orders. “We’re actually probably going to limit that — just stop taking orders for anything beyond a certain period of time,” he said.

Then there are the complicated political calculations that might come from owning Twitter. Rival tech billionaire Jeff Bezos is among those raising the possibility that Musk’s dependence on manufacturing in Shanghai might leave him exposed to pressure from China to censor Twitter. The often irascible chief executive barely blinked as he brushed off the suggestion: “I’ve seen no indication to that effect.”

Musk has been quite happy to step over political fault lines that other business leaders have avoided. The Tesla boss singled out the current Shanghai Covid-19 lockdowns as an immediate risk to Tesla’s fortunes. Illustrating his close relationship with the Chinese government, Musk said he had discussions that eased his concerns.

“I’ve had some conversations with the Chinese government in recent days, and it’s clear that the lockdowns are being lifted rapidly,” he said, taking a more moderate tone than he used when challenging a previous plant closure order in California. “So I would not expect this to be a significant issue in the coming weeks.”

On the fractured political climate in the US, he pulled no punches in attacking what he claimed was leftwing bias at Twitter and arguing for the reversal of Donald Trump’s permanent ban from the network. His goal, he claimed, was to make enemies at both extremes of the political spectrum.

For critics on the left who suspect him of personal pro-Trump bias, Musk had a different message. Shutting the ex-president out did not silence his “voice”, but instead served to “amplify it on the right”, he said — making it essential to bring him back to a broader social media platform.

While outspoken in his attack on Twitter’s overreach, Musk on Tuesday projected a far more measured tone than in some recent appearances as he acknowledged the challenges of managing Tesla’s growth. In contrast to previous over-optimistic production forecasts, he tempered expectations, referring to Tesla’s recently stated goal of producing 20mn cars a year by 2030 as an “aspiration” rather than a hard target.

He also singled out availability of raw materials for its batteries as one of the biggest obstacles to Tesla’s long-term goal. Asked if Tesla might even buy a mining company to guarantee supplies, he made it clear that all options are on the table: “It’s not that we wish to buy mining companies, but if that’s the only way to accelerate the transition [to sustainable energy], then we will.” 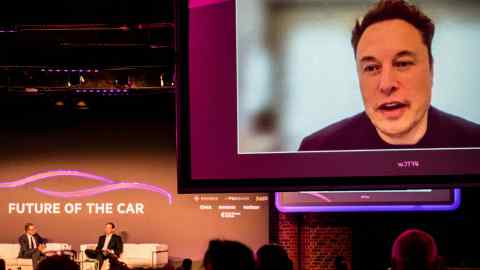 Musk did not shy away from backing decisions that could entail big financial risks for Tesla, including going ahead with a limited form of self-driving technology if he thought it would save many lives. “We’re just going to take the heat,” he said. “If we believe that the probability of injury is reduced . . . but we also know that we’re going to be sued despite doing the right thing, we will do the right thing and get sued.”

A more measured tone crept in as he discussed free speech on Twitter. Musk’s insistence until now that he would allow any speech on Twitter as long as it is legal has brought a storm of complaints. On Tuesday, he said Twitter should limit the spread of things that are “destructive to the world” — a loose term that left room for plenty of subjectivity in Twitter’s future moderation policy.

While rejecting permanent bans like the one on Trump, he suggested for the first time that Twitter should have other ways to limit the spread of damaging information — including “a timeout, a temporary suspension, or that particular tweet should be made invisible or have very limited traction”.

Those weapons already exist in Twitter’s content moderation arsenal, implying that the gulf over how to defend free speech online may not be as wide as he has previously painted it.

Video: Elon Musk talks to the FT about Twitter and Tesla

admin - September 24, 2022
0
A Michigan man was killed in what police are labeling a domestic incident that involved an attempted suicide. Although police reports about the incident...

4 South by Southwest predictions about the future of dealmaking