Ukraine has upgraded its war aims and is now looking to push Russian forces out of the country as long as western allies rapidly deliver promised heavy weaponry, its foreign minister has said.

In a sign of the growing confidence in Kyiv after Moscow’s offensive in the eastern Donbas region appeared to have stalled, Dmytro Kuleba told the Financial Times “the picture of victory is an evolving concept”.

“In the first months of the war the victory for us looked like withdrawal of Russian forces to the positions they occupied before February 24 and payment for inflicted damage,” Kuleba said in an interview.

“Now if we are strong enough on the military front and we win the battle for Donbas, which will be crucial for the following dynamics of the war, of course the victory for us in this war will be the liberation of the rest of our territories.”

Kuleba said only Russia’s defeat would allow Ukraine to reopen its Black Sea ports and revive its export economy. If Kyiv received “even more military support, we will be able to throw them back from the Kherson region [in southern Ukraine], to defeat the Black Sea fleet and unblock the passage”.

But he also acknowledged the bloodshed could be too great and Ukraine might ultimately have to negotiate a settlement. In that event, Kyiv would want to “approach the unavoidable moment with the strongest cards possible”, he said.

If the battle is raging today, and howitzers and drones are arriving tomorrow, that is not how it should work

Kuleba spoke hours after the annual Victory Day parade in Moscow’s Red Square, during which Russian president Vladimir Putin made clear his determination to vanquish Ukraine even as he did not announce a full mobilisation or issue a formal declaration of war.

Kuleba said the lack of verbal escalation from Putin made no difference to the situation on the battlefield, where “the worst has already happened”.

To defeat Russia, he said Ukraine’s allies had to deprive it of oil and gas revenues “to park the Russian war machine”.

They also needed to improve the “timeline and sustainability” of weapons supplies. Kyiv has berated western governments for dragging their feet over the supply of long-range, heavy weaponry of its own choosing.

“If the battle is raging today, and howitzers and drones are arriving tomorrow, that is not how it should work,” Kuleba said.

But he said Ukraine’s resilience in the first phase of the invasion — when it fended off a Russian attempt to seize Kyiv — and the fact that it had proven “trustworthy” using western-supplied anti-tank weapons and surface-to-air Stinger missiles had been a “game-changer” for western perceptions.

Kuleba said Ukraine wanted a permanent “mechanism” for co-ordinating weapons pledges and deliveries among western allies so that donors did not make ad hoc pledges from their stockpiles.

Kuleba said the immediate focus in the battle for Donbas was the need for artillery, including howitzers, which the country was receiving, as well as multiple-launch rocket systems that have not been supplied.

He expressed hope that Kyiv would receive US-made systems rather than stockpiled Soviet-era “Grads”, even before the US Congress approves a $33bn package of economic and military assistance, expected towards the end of May.

“The promise was given,” Kuleba said.

The minister said he was convinced Ukraine’s allies would back it all the way, including pushing Russia out of Donbas and Crimea, because it was Moscow’s aggression that had given the west a new sense of purpose.

When “democracy was in decline” and “authoritarian regimes on the offensive” three months ago, Kuleba said it was Ukraine’s resistance that “brought the US and EU back together”.

“They already feel that our victory will also be their victory and this is why I believe they will stand by us,” Kuleba said. 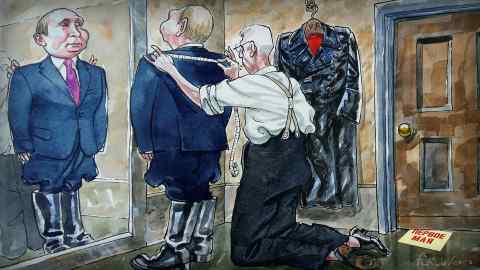 Responding to French president Emmanuel Macron’s prediction that it could take “several years, in truth undoubtedly several years” for Ukraine to join the EU, Kuleba said: “Three months ago this country did not even have a membership perspective. Now they are discussing how long it will take.”

The most important thing was for Ukraine to be given membership candidate status by the EU in June. “Then we will sit down with you and resolve the rest of the issues. How. When, and so forth.”

Macron and some other leaders have proposed forms of associate membership but Kuleba said these could not be a substitute for Kyiv.

“If we don’t get the candidate status, it means only one thing, that Europe is trying to trick us. And we are not going to swallow it.

“Ukraine is the only place in Europe where people are dying for the values the EU is based on. And I think this should be respected.”

Video: Henry Kissinger: ‘We are now living in a totally new era’

admin - October 6, 2022
0
The global need for power to provide ubiquitous connectivity through 5G, 6G, and smart infrastructure is rising. This report explains the prospects of...