Weeks after South Africa’s worst flash floods in decades struck the port of Durban, Chris Moodley’s freight forwarding company was still fishing truck cabs out of the Umhlatuzana river and clearing away debris.

April’s record rains killed more than 400 across the country in landslides and floods and throttled operations at the port, the busiest in sub-Saharan Africa and a gateway to South Africa’s industrial heartland and the wider region. Supplies of everything from cobalt mined in the Democratic Republic of Congo to citrus fruit bound for Asia were disrupted.

“The water just started rising and rising. Within a few minutes, it was waist deep . . . trucks, trailers and machines were washed out of the property,” said Moodley. “Trees were coming down the river. It was crazy, crazy.”

A broken bridge has yet to be repaired and river banks have been eroded. The floods came a year after Durban was the centre of violent unrest over the jailing of former president Jacob Zuma, the worst since the end of apartheid, and highlight the lack of public investment in the port. Successive crises, and economic decline under President Cyril Ramaphosa’s governing African National Congress, have damaged Durban’s position as a regional gateway, said Moodley.

That question is perhaps second only to resolving blackouts at Eskom, the state power utility, in terms of its importance to Ramaphosa’s attempts to revive the South African economy from years of torpor.

About 60 per cent of South African exports go through the port of Durban and these shipments represent the “lifeblood” of the economy, said Bonke Dumisa, a local economic analyst. Durban’s home province of KwaZulu-Natal is the second-biggest provincial economy after Gauteng, home to Johannesburg. “The better management of Durban’s port could make things better for everyone,” he added.

The Durban container terminal handled about 4.3mn units in 2021, down from 4.8mn in 2018. Since the floods, traffic through the port has been subject to huge disruption, with trucks now sometimes waiting up to 24 hours to offload containers in the port. These disruptions are “the equivalent of having a heart attack as a nation,” one trade executive in the city said.

As a result, Durban has fallen to the bottom of the World Bank/Markit global port rankings, at 349 compared with the Horn of Africa’s port of Djibouti’s 61. This drop contrasts with the growth of other ports up the Indian Ocean coast, such as Mombasa, which are better placed for opening up the continental interior to Asia.

“Durban is still the gateway to South Africa, but it has not lived up to its promise of being the gateway to Africa,” Peter Hall, a professor of urban studies at Simon Fraser University and international port expert, said. “The grander ambitions of the post-apartheid Durban port being the entry point for everything south of the equator — these have been displaced by the resurrection of links between east Africa, and India and China,” Hall said.

The decline also reflects the long dominance of the Durban port by the state freight monopoly, Transnet, Hall added. The victim of systematic looting under Zuma, Transnet has presided over frequent breakdowns of machines at the port, said Moodley, who represents a group of private transporters. As a result, shipping lines levy onerous fees for cargo stuck at the port, he added.

These fees come on top of surging international freight rates that reflect inflation and the global turmoil in supply chains. In the past year, the cost to dispatch a 12-metre, hazardous-material container from Ningbo, China’s busiest cargo port, to Durban has risen from $2,800 to $14,500, Moodley said.

Transnet was “not investing enough in capacity” before, said Portia Derby, Transnet’s chief executive, but it was overhauling maintenance and reforming the flow of goods through the port. It also planned to privatise parts of the Durban container port and the freight rail line to Johannesburg.

But many analysts say these plans will fail unless the city’s “back of port” infrastructure, such as roads and bridges, are fixed. “It has not been maintained, it has not been upgraded, it is just getting worse and worse,” said Mark Chettiar, another freight forwarder.

The local council is a stronghold of Zuma acolytes and has long represented the seamy underbelly of the party. “The city’s politics are so mired in factionalism and short-term thinking that nobody thinks beyond what is currently confronting them,” said Mbali Ntuli, a community activist and former politician in the opposition Democratic Alliance.

“There is nothing to incentivise the current leadership of the city to have long-term city planning around integrated housing planning, future infrastructure development or even current infrastructure maintenance,” she added. 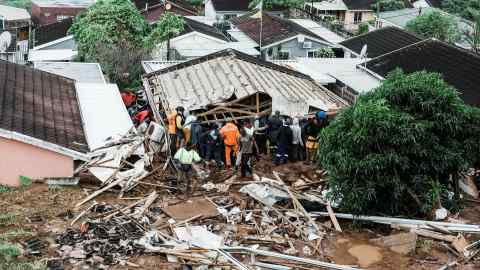 So deep is the perception of graft that many assumed that government aid after the floods was already as good as stolen and instead relied on charity to restore basic services.

“It is a great source of shame that when this disaster struck, the most burning public debate was around fears that the resources allocated to respond to this disaster would be misappropriated or wasted,” Ramaphosa told South Africa’s parliament last month.

South Africa’s better roads, internet and banking links still give it a strong advantage over the rest of the region, said Dumisa. Key to this is the politics. “If we do not get our politics right, the strengths of KwaZulu-Natal, based on the port, will be a thing of the past,” he said.

admin - September 28, 2022
0
A home-equity loan is a lump sum that you borrow against your home’s equity when you’re in need of extra funds. Read More Source...

Inflation, flight delays, and a lifeguard shortage are taking a toll...

60% of college kids have been diagnosed with a mental health...