Brussels has shelved its plans to ban the EU shipping industry from carrying Russian crude as it struggles to push through its latest sanctions package because of anxiety among some member states about the economic impact of the measures.

A proposal targeting shipping that was introduced last week has been dropped by the European Commission following hard lobbying from Malta and Greece, which is home to more than half of the EU flag tonnage, said several people familiar with the talks.

Separately, Hungary is continuing to withhold its backing from a proposed EU ban on imports of Russian oil, even after talks on Monday evening between commission president Ursula von der Leyen and Hungary’s prime minister, Viktor Orbán. A commission spokesperson insisted the discussions showed “there is a path forward”.

The EU is attempting to increase the economic pressure on Vladimir Putin’s regime by targeting its lucrative oil industry, but the proposed measures risk hitting a number of EU economies hard, meaning Brussels is being forced to agree to numerous carve-outs and exemptions to win over all 27 member states.

The proposed shipping ban was seen as a way of making it more difficult for Putin to mitigate the effects of the proposed EU oil ban by transporting crude to other countries around the world.

However, some member states argued during the talks in recent days that an effective shipping ban should involve other countries such as the US and UK, particularly if Washington could exert influence over nations where many vessels are flagged, such as Liberia, the Marshall Islands and Panama. The lack of agreement among the G7 nations was central to the proposal being dropped.

The EU’s executive arm has also been proposing a ban on European companies providing the services, including insurance, that are needed to transport Russian oil anywhere in the world. That provision is expected to stay despite a reluctance from some member states, the people said.

Targeting maritime insurance is a potent tool because most Russian oil exports are transported via tanker and the largest specialist insurers for the sector operate primarily in western countries.

All of the 13 Protection & Indemnity (P&I) Clubs under the International Group, mutual insurers for shipping that cover third-party liabilities including bunker fuel spills, wreck removals and personal injury, are managed from the UK, EU, Norway, the US and Japan and cover 90 per cent of ocean-going ships.

Most ports require vessels to have P&I certification, and buyers of Russian oil would be extremely reluctant to be on the hook for claims that could run into hundreds of millions of dollars without such cover.

Diplomats hope the UK can be convinced to sign up to the financial services measure, which would be critical given the importance of the Lloyd’s of London insurance market.

If a co-ordinated EU, US and UK ban on maritime financial services were to be introduced, some shipping experts predict trade in Russian oil would increasingly rely on the “ghost fleet” tactics used in the trade of Iranian and Venezuelan oil, such as putting vessels under fake registries, spoofing location signals, blending oil and transferring cargoes multiple times. 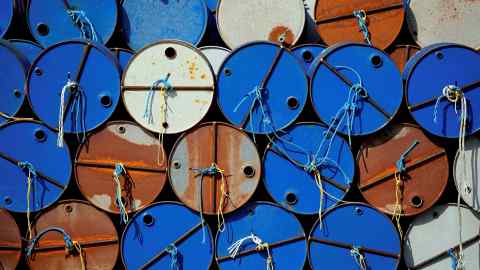 In a further sign of the complications involved in landing an EU deal on the package, however, von der Leyen on Monday flew to Budapest to meet Orbán, who has been refusing to sign up to the oil embargo.

The commission has been seeking to convince Hungary and a number of other central and eastern European countries to sign up by offering them extra time and potential financial support to join the blockade.

Hungary is among the countries hoping for a longer phase-in period than the bulk of member states for the ban; it is also seeking EU financial support to help engineer its transition away from Russian fossil fuels, helping it invest in alternative infrastructure.

Hungary is also anxious about becoming heavily reliant on oil pumped into the country via a pipeline from Croatia once it weans itself from Russian supplies. Other member states, including Slovakia and the Czech Republic, are also expected to receive special terms in the energy sanctions given their reliance on Russian crude.

Von der Leyen said on Twitter that her discussion with Orbán had been “helpful to clarify issues related to sanctions and energy security”. But while they had made progress, she added that “further work is needed”.

The president added that she would convene a call with regional players aimed at strengthening co-operation on oil infrastructure. The commission’s work with Hungary and its partners will now focus on oil transport infrastructure, storage, its refinery sector and ways of facilitating the transformation of Budapest’s energy sector.

The commission spokesperson said Hungary’s focus is on ensuring the country’s energy security, while on the commission’s side it is about finding the right conditions to move forward to a consensus among member states on the sanctions package.

Police say shooting that killed 10 in US grocery store was...