One ordinary investor said Blanc’s speech at the meeting on Monday — where she highlighted a string of disposals and the company’s planned £4.75bn capital return — did not match with the share price performance over the past decade and “signifies she’s not the man for the job”.

Blanc joined when Aviva was worth around £11bn. The company is now worth £15bn, compared with the £20bn-plus levels reached in the 2010s.

Another individual investor, Michael Mason-Mahon, referenced previous leaders of the company and questioned whether Blanc should be “wearing trousers”.

Ted O’Toole, a third small shareholder, congratulated the board on its gender diversity, with women making up nearly half of it, then added: “They are so good at basic housekeeping activities, I’m sure this will be reflected in the direction of the board in future.”

At the end of the discussion, Culmer said: “I’m not going to say thank you to everyone for your comments, because I think there were some comments in that session that were simply inappropriate and I do not expect and would [not] want to hear at any future AGM. I’m flabbergasted, to be honest.” 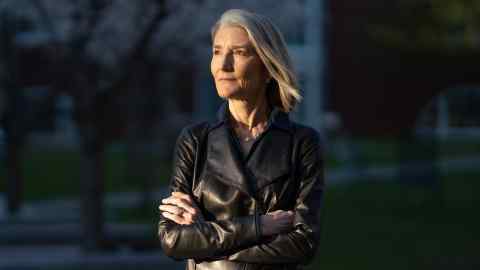 The chair has admonished rude remarks at previous AGMs but it was the first time that those remarks have been “sexist” in nature, according to one person familiar with the matter.

The event was Aviva’s first in-person general meeting since the pandemic, held in Westminster and streamed online. Management was peppered with questions on a busy period for the company that has included eight disposals in eight months.

Blanc denied press reports that Aviva had considered launching a Lloyd’s of London syndicate and then U-turned. “We are still looking at all distribution channels,” she told the audience.

Americans are snapping up new jobs faster than ever, despite layoffs