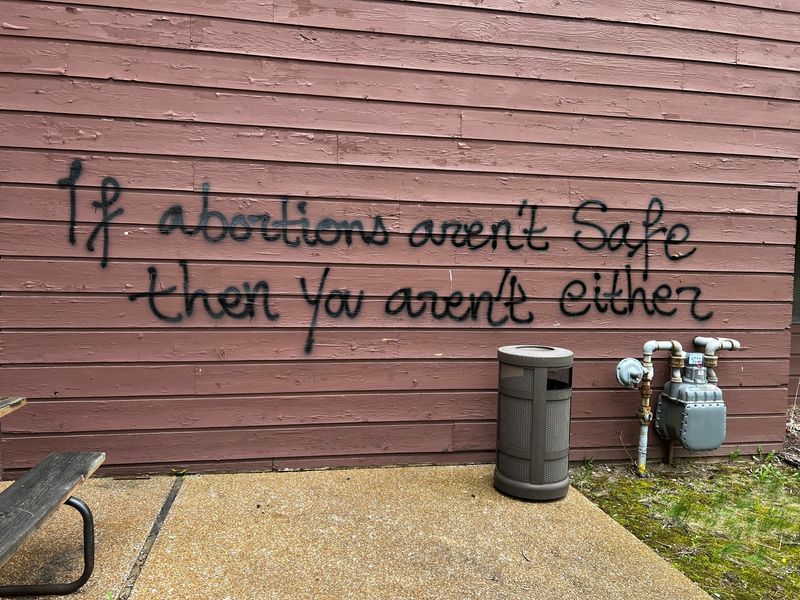 © Reuters. A threat is spray painted on the building wall near Wisconsin Family Action’s offices in Madison, Wisconsin, U.S. May 8, 2022. Molly Beck/USA TODAY NETWORK via REUTERS

(Reuters) – The office of a conservative Wisconsin anti-abortion group was set on fire on Sunday, police said, days after it emerged that the Supreme Court is poised to reverse a landmark decision ensuring abortion rights nationwide.

A graffiti saying “if abortions aren’t safe, then you aren’t either” was also left behind, the Wisconsin Family Action’s office said in a statement, blaming a “leftist anarchist group” for the attack.

The Madison Police Department said it was investigating the Sunday morning fire as arson, adding that the fire was quickly put out by the local fire department. The department did not identify any suspects and said no injuries were reported.

The police said a molotov cocktail was thrown inside the building but that it had not ignited. “It appears a separate fire was started in response,” the police said.

Wisconsin Family Action says on its website it seeks to advance “Judeo-Christian principles.” It supports marriage as being “between one man and one woman” and the promotion of abstinence in the secondary school system. The group says it also opposes laws that support abortion.

The draft opinion, authored by conservative Justice Samuel Alito and published on May 2 by the Politico news outlet, would uphold a Mississippi law banning abortions after 15 weeks of pregnancy and overturn the landmark 1973 Roe v. Wade decision that legalized abortion nationwide.

The leak set off a political firestorm, with abortion-rights supporters staging rallies outside the courthouse and at locations around the United States, as well as an internal crisis at the nation’s top judicial body where an investigation into the source of the unprecedented disclosure is underway.

The leak comes months before voters go to the polls for congressional midterm elections in November.

admin - October 1, 2022
0
They crossed the border looking exhausted, dragging their suitcases through the mud, but the group of young Russians fleeing the threat of conscription...

admin - October 1, 2022
0
Gateway Pundit Given 99.92% Conservative Score on Secret Govt. "Enemies List" -- We Apologize for Our Imperfections and Will Work Harder to Gain...

admin - October 1, 2022
0
The UK’s biggest banks are set to make bumper profits from rocketing interest rates even as they pull mortgage products from the shelves...

New research shows the top drivers for the Great Resignation