Former Swedish foreign minister Margot Wallström once described opinions her country should enter Nato as “absurd”. Now the 67-year-old doyenne of the ruling centre-left Social Democrats is not so categorical about the prospects of her country joining the western military alliance.

Wallström, who is playing a central role in the debate triggered by Russia’s invasion of Ukraine, said in an interview it was important to help prime minister and party leader Magdalena Andersson deal with a topic so sensitive that it could split the Social Democrats ahead of general elections in September. She hinted a Nato membership application was a likely outcome.

“Everybody trusts Magdalena. Nobody wants this as an issue in the election campaign. It’s obvious that it only takes us in one direction,” she told the Financial Times.

She added: “It’s not ideal to have a decision like this when fear is the emotion that people have — maybe fear is what forces us to make these important decisions.”

The change of tack within one of Sweden’s political forces that has cared deeply about the Nordic country’s non-alignment is one aspect of the security shock Vladimir Putin has caused by deciding to attack Ukraine, another non-Nato country, and trying to topple its government in February.

This week, Sweden’s parliament is set to issue a report on Nato, before a possible formalisation of the country’s position by the ruling party at the weekend. By then, in neighbouring Finland, President Sauli Niinistö and prime minister Sanna Marin will have made their positions clear — with everything pointing to Helsinki saying yes to joining the western alliance.

In Finland, the Nato debate has been broad and largely consensual across all political parties. But in Sweden, it largely boils down to the Social Democrats, who have taken first place in every election since 1917. The Moderates and three other centre-right parties have long backed membership, and the nationalist Sweden Democrats have changed their mind to support it if Finland joins.

“This is the single most important decision this country has taken,” said one Swedish business executive. “And we are taking a decision at breakneck speed.”

After 200 years of not having fought a war and decades of public commitments to peacemaking and nuclear disarmament, it is hard to overstate the importance of military non-alignment to the soul of Swedish Social Democrats.

“For the Social Democrats, this is a religious issue,” said Hans Wallmark, MP for the opposition centre-right Moderates and a long-time supporter of Nato membership. “They need to be converted.”

One of the main reasons for this reluctant conversion is Finland’s decision on joining Nato and its lobbying to get Stockholm to follow suit. “They are begging us,” said one Swede close to the talks.

“Finland is Sweden’s closest ally with historical, cultural and political ties which run deeply. Of course, Finland’s choice will impact Sweden’s future policies as well,” said Aida Hadžialić, a member of the Social Democrat party board that will make the party’s decision.

Another reason for Swedish Social Democrats to reconsider their position is that they do not want security to be an issue in parliamentary elections this autumn, especially with opinion polls showing a majority in favour of joining the defence organisation.

“They really want to avoid an election campaign on defence and Nato with a clear majority in favour of membership,” said Wallmark.

For a party whose identity is in part built on two centuries of non-alignment, there is a sense of unease at the pace with which Sweden might do the previously unthinkable.

“Yes there is part of the discussion that goes really fast,” said Lawen Redar, a Social Democrat MP who also sits on the party’s board. “If Finland goes first on this, it leads to time limits.” 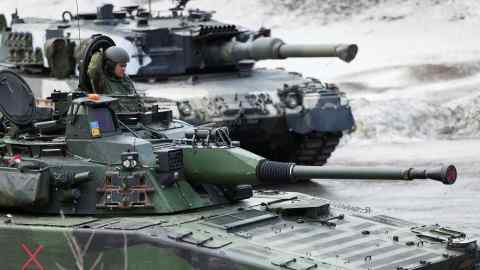 Wallmark said one big difference was how the Russian threat was perceived in each country. Moscow is an “existential threat” for Finland, which shares a long border with it, but “Swedes know we are probably not the primary target”, he added.

As dozens of Social Democrat meetings take place up and down Sweden, Redar said there was “a huge respect” inside the party and an understanding that the geopolitical situation had changed.

Still, she said: “There are different opinions on this. It’s not an easy move. The main question within our party on Nato is how can we remain an actor for democracy, peace and disarmament?”

Wallström said many worried about Sweden’s credibility on nuclear disarmament, or peace in countries such as Yemen, if it joined Nato.

These concerns have revived fears of Sweden’s dominant party being divided into two irreconcilable camps. “We must do everything to avoid the country and the party become split forever. It’s not that we should be suddenly silenced on what we hold dear, though,” Wallström added.

However although factions in the party have come out against membership, the mood seems to be towards acceptance that Sweden has few options if its neighbour joins. Redar said defence spending would have to increase enormously if Sweden stayed outside Nato; a business leader estimated it would have to be 4-5 per cent of gross domestic product.

Hadžialić said the main issue was “how we best defend our country and our security”. A refugee to Sweden who fled the Bosnian genocide, she added that Russia’s invasion had “brought back memories”.

“I know what it is to face an aggressor where you have to stand defenceless when you don’t have multilateral agreements to help you. In that situation, Nato came to the rescue.”

Sweden’s premier, Andersson, faces the task of balancing all these conflicting arguments to take a historic decision. “She’s walking a very thin tightrope,” said the business leader. “It’s a party that is all over the place.”

How to Choose a Crypto Exchange for Trading and Investment?

Beyond Meat executive arrested for biting a man’s nose