In the run-up to the Muslim feast marking the end of Ramadan, Mona, a teacher in Lebanon for more than 30 years, worked in a parking lot to supplement her meagre income, now worth less than $150 a month.

After a years-long crisis and the collapse of the Lebanese pound, “the only ones who can afford to buy anything for Eid this year are Hizbollah’s people”, she said, referring to the supporters of the Iran-backed political and paramilitary group that dominates politics.

In a country once known for its decadence, cabbage heads are now sold in thirds. “Those with [Hizbollah] pull out stacks of crisp L£100,000 notes, while the rest of us are counting petty change to buy our groceries,” said Mona.

Areas traditionally dominated by Hizbollah, such as the southern city of Nabatiyeh where Mona lives, are among the hardest hit. Yet most experts expect Hizbollah and its allies to hold on to their parliamentary majority in this month’s general election, the first since the collapse of the economy in 2019, subsequent anti-corruption protests and a devastating port blast in 2020 that wrecked swaths of the capital, Beirut, killing 215 people. The new government will face the onerous task of IMF negotiations over the economic reforms needed to unlock billions of dollars in loans and aid.

Despite burgeoning discontent, Hizbollah — designated a terrorist group by the US and some European nations — has maintained its hold over a battered electorate through its vast patronage network, sectarian incitement and intimidation of opposition supporters, analysts say.

“The community that usually votes for Hizbollah still does not have a clear alternative, which Hizbollah knows and nurtures,” said Lina Khatib, director of the Middle East programme at Chatham House. “They have also shown they have access to US dollars when other people don’t.”

The group has maintained a steady flow of dollars to its members, and its charitable organisations still provide extensive aid to the wider community. With salaries for civil servants now worth less than $100 a month, the party had retained loyalties by doling out up to 10 times that amount, several rank-and-file Hizbollah members said.

Its patronage aside, the calamitous straits Lebanon finds itself in could help ensure Hizbollah’s continued powerful influence in a coalition government, said Mohanad Hage Ali, a Beirut-based fellow at the Carnegie Middle East Center.

Few believe the election will improve economic prospects. A recent Oxfam survey found only 54 per cent of voters were willing to vote. The apathy is particularly acute for Sunnis who are leaderless after former prime minister Saad al-Hariri and his party withdrew from politics, complaining of Iran’s undue influence.

Although Hizbollah could pick up seats if Sunni voters boycott the vote, they still need their Muslim and Christian allies to hold on to theirs in order to guarantee their majority. In the 2018 election, Hizbollah and its Shia allies, including Amal, won 27 seats in the 128-seat parliament, which is divided equally between Muslim and Christian parties. Together with the Free Patriotic Movement, the Maronite Christian party of President Michel Aoun, and Amal, the Shia militia-turned-party, it commands a majority of at least 70.

Through its traditional role as protector and provider, Hizbollah has been able to deflect much of the criticism aimed at the ruling elite. Many direct their ire about corruption towards the FPM and Amal. “This is an election to save their allies,” said Hage Ali.

Hizbollah does have some cause to be nervous, analysts say. Many Lebanese blame it for the deadlock over reforms, the investigation into the port explosion and for the 13 months it took to form the last government. Others question the maintenance of an arsenal, which Lebanon’s government and the group have argued is necessary to counter Israeli occupation of disputed territories along Lebanon’s southern border.

“The Hizbollah of today is not the Hizbollah of 2006,” said Mona, referring to its war against Israel, once described as a “divine victory” by its supporters. Fearing a backlash, she asked for her last name to be withheld.

“We are with the resistance. We want them to keep their weapons to defend us,” she said. “But clearly, they’re not doing a good enough job steering the country straight . . . their allies are all completely corrupt.”

This kind of public criticism is rare but it is on the rise, said Hage Ali. The fraying of a once-reliable Shia voting bloc has pushed Hizbollah and Amal to deploy more intimidation tactics against opposition candidates and voters who may want to stray, activists say. Opposition candidates report threats of violence and trouble recruiting representatives to work at polling stations. Hizbollah and Amal party loyalists monitor electoral rolls and harass those who do not vote their way, voters say. 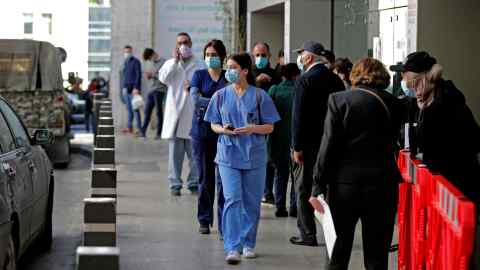 Opposition candidate Wassim Ghandour’s South 3 district, which includes Nabatiyeh, is the only one in Lebanon where opposition candidates have managed to unite. “Even if we don’t win a seat this time, we are setting the foundation for 2026 and beyond,” said 55-year-old Ghandour.

“I believe we are echoing the silenced — those who cannot express themselves in the south . . . We are all victims of this very ugly system . . . We have no other choice but to run against them to try and save ourselves,” he added.

Whatever the outcome, negotiations to form a new administration will probably take time and economic recovery will be slow. A Hizbollah-led majority could further alienate Gulf countries, once big investors in Lebanon as they sought to counter Iran’s influence.

In the meantime, voters are simmering. Tariq, a 35-year-old shop owner in Tyre, another southern city where Amal and Hizbollah hold sway, said he and everyone he knows would vote for “anyone who stands against them”.

“My three-year-old son has eye cancer,” said Tariq, who also asked for his last name to be withheld for fear of retribution. “Do you think any of them did anything when I asked for help to pay for treatment to save his life?”

Abortion battle shifts to US Congress and midterm elections

Inflation is driving the gig economy as Americans try to make...