Filipinos began voting on Monday in a national election that pits the offspring of two leading political dynasties against a progressive candidate promising a break with the country’s increasingly authoritarian governance.

A poll by Pulse Asia published last week showed Marcos with 56 per cent of popular support, more than double the 23 per cent for Robredo. Duterte holds an even larger lead over Pangilinan under an electoral system that allows voters to vote for presidents and vice-presidents from different parties.

More than 67mn of the country’s population of almost 110mn are registered to vote.

The elevation to a six-year term for Marcos, 64, would mark the political rehabilitation of a family that presided as one of Asia’s most notorious dictatorships. It would also lift the fortunes of Duterte, 43, who outpolled all competitors including Marcos for the presidency before deciding to run alongside him.

Robredo, 57, narrowly defeated Marcos for the vice-presidency in the election that brought Rodrigo Duterte to power in 2016 and was a vocal critic during the latter’s term. She has won enthusiastic grassroots support on a platform of restoring trust in government and lifting the economy.

“We are not merely replacing the top position; this is an informal referendum on Duterte’s politics and policies,” said Aries Arugay, a professor of political science at the University of the Philippines Diliman. “It’s clear that one campaign seeks to continue what Duterte started and one really wants to have a paradigm shift in how politics is conducted.”

At a polling station in Quezon City, part of greater Manila, people queued around the block to vote, some wearing the red of Marcos’s campaign or the pink of Robredo’s.

“The country deserves better governance,” said business owner Winston Manabat, who was voting for Robredo and believed she could win.

“We don’t believe in any of the polls because at the end of the day, the polls can be fudged,” he added. “The dynamics on the ground give a totally different indication.”

Kenneth Lim, a technician, said he was supporting Marcos because “he will bring change in our country, in the economy”. He said: “I think he will do like his dad.”

Analysts said that Marcos’s popularity had been helped by a careful campaign to reframe his father’s dictatorship as a golden age of prosperity, even though billions of dollars were looted from state funds and the Philippines suspended debt payments during his rule.

The Marcos family fled to Hawaii in 1986 after facing the “People Power” mass protests, but returned five years later. Imelda Marcos, Ferdinand’s widow, Marcos Jr and his sister Imee Marcos have since rebuilt their political base. 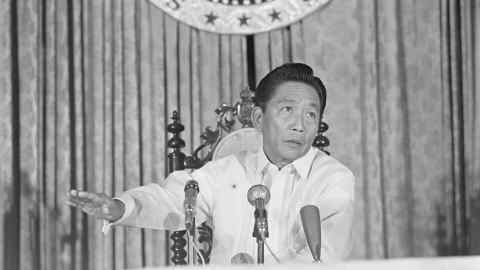 Victims of the Marcos regime have tried unsuccessfully to block Marcos’s candidacy by petitioning to the country’s elections commission on the grounds of a past tax conviction.

A group of more than 1,400 Catholic priests calling themselves Clergy for the Moral Choice has endorsed Robredo, deploring what they called “fake, deceptive and manipulative claims that aim to revise the history of our country”.

“This is not just about candidates, but this is about values, the truth, the freedom to express, and people are being misguided because of the wrong information,” said Father Jun Sescon, one of the priests backing Robredo. “The priests felt duty bound to be the voice of truth.”

Analysts said they expected the next government, regardless of its leader, to continue pursuing pro-growth policies similar to those implemented under Duterte.

“They have been very quiet about any policy statements because they are so far in the lead,” said Jon Morales, associate director with Vriens & Partners, a government affairs consultancy. “But most believe they will leave the wheels of the economy to competent people.”

But Morales added that he expected to see “specific sectors being parcelled out almost as gifts”, which “will shut down competition in some sectors through the creation of various subtle barriers”.

How much protein do I need in a day?

admin - September 26, 2022
0
Kwasi Kwarteng made headline in 1995 when he twice uttered the word “fuck” on University Challenge: the same word reverberated around trading rooms...