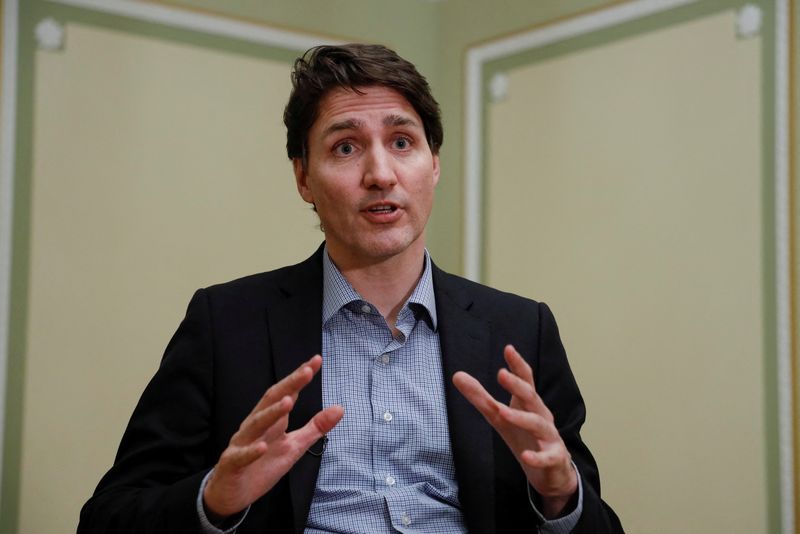 KYIV (Reuters) – Canada wants to be a good energy partner to Europe but will not abandon its climate goals and planned transition to cleaner fuels, Canadian Prime Minister Justin Trudeau said late on Sunday.

Trudeau, in an unannounced visit to Ukraine, also said he trusts the Bank of Canada as it attempts to tame three-decade high inflation. Earlier, Trudeau said Canada will provide new weapons and equipment for Ukraine and reopen its embassy in Kyiv, the country’s capital.

In March, Canada released a roadmap to meeting 2030 climate targets, laying out detailed plans and C$9.1 billion ($7.3 billion) in spending to cut planet-warming carbon emissions after years failing to meet its goals. It plans to cut carbon emissions 40-45% below 2005 levels by 2030.

Oil and gas is Canada’s highest-polluting sector, accounting for 26% of total emissions. To meet the government’s target, the industry would need to make drastic cuts.

“Canada is one of the largest oil and gas producers in the world, but at the same time, we know how important it is to move even faster on the transition towards net zero,” Trudeau said.

The government is in discussion with Repsol (OTC:) and Pieridae Energy, the companies behind two proposed east coast liquefied (LNG) export facilities, to see how it can speed up the projects and help boost supply to Europe, Canada’s natural resources minister told Reuters on Friday. [L2N2WY1YV]

“We’re looking to be good partners on energy with our European friends but we’re never slowing down in our fight against climate change,” Trudeau said on Sunday.

“Part of that is recognizing that the same infrastructure that can be used for LNG can also be used for hydrogen and ammonia that are possibly going to fuel the transition off of fossil fuels.”

(Reporting in Kyiv by Tom Balmforth, Writing in Toronto by Amran Abocar, editing by Diane Craft)

Paywalls are here to stay, but they’re closing off the internet. Crypto can fix that

Axie Infinity flamed out. Can parent company Sky Mavis make the most of a...

admin - October 6, 2022
0
Axie Infinity is the most famous—or perhaps infamous—game to come out of the crypto industry. At its peak during last year’s crypto boom,...

US Rats Out Ukraine – Blames Assassination of Putin Ally’s Daughter Who Was Killed...

admin - October 6, 2022
0
US Rats Out Ukraine - Blames Assassination of Putin Ally's Daughter Who Was Killed in Explosion on "Elements of Ukrainian Government" ...

This device lets you build your own private cell service

admin - October 6, 2022
0
TL;DR Ukama is a crowdfunding project that promises to let you create your own decentralized cellular network. The software and hardware are open source. The indoor,...

Is it safe to take melatonin every night?