Thousands of troops and a formidable array of military hardware will be on show in Moscow’s Red Square and cities across Russia on Monday as the country holds its annual Victory Day to mark the end of the second world war. But this year something will be different: marchers will hold photographs of soldiers killed in the current Ukraine war alongside those who fought in the earlier conflict, as Moscow draws a direct parallel with its historic fight against fascism.

International observers will be scrutinising the event for any sign that the Ukraine war has eroded Moscow’s military might and for what it might do next. For President Vladimir Putin, the parades are an opportunity to project Russian power just as its image is being undermined by recent losses.

But Victory Day is also a chance for the Kremlin to harness the emotional power of the second world war — which Russians call the Great Patriotic War — to justify its assault on its neighbour.

Some 24mn Soviet citizens died in the battle against the Nazis between 1941, when Germany invaded the Soviet Union, and 1945, and the story of that sacrifice resonates with Russians to this day. Conscious of this, the Kremlin has repeatedly justified its invasion of Ukraine by citing the need to “de-Nazify” Ukraine, depicting the war as a heroic and historic mission thrust upon the Russian people.

“The date carries a lot of meaning for Putin,” said Tatyana Stanovaya, founder of analysts R. Politik. “In the context of war against Ukraine, Putin will utilise May 9 and all the victory celebrations to justify Russia’s invasion and set it in a wider context of the fight against Nazism.”

Heavily promoted by state media, the notion that Russia is fighting Nazism in Ukraine has taken root domestically even though extreme rightwing views are fringe in Ukraine and the country’s president Volodymyr Zelensky is Jewish.

Last week Russian foreign minister Sergei Lavrov said during an interview on Italian television that Zelensky being Jewish did not negate the “Nazi elements” inside Ukraine since “Hitler also had Jewish blood” and that “the most ardent anti-Semites are usually Jews”. Putin was later forced to apologise to Israel for the remarks.

Monday’s event will also depict Russia as facing an existential threat, say analysts. “Putin’s parade speech and the performance as a whole will primarily be addressed to the Russian public,” with the message that citizens must “rally around the flag and the leadership” to ensure Russia’s survival, said Alexander Gabuev, senior fellow at the Carnegie Endowment for International Peace.

Many in Russia had expected the Ukraine conflict to be over by May 9, allowing Putin to claim victory in time for the celebrations.

“Clearly, nothing meaningful will have been concluded by May 9,” Gabuev said. Russia’s gains so far would be claimed as a “temporary achievement of its goals, during the first stage of the operation” but with a clear message that the fighting would continue, he said.

Many observers will be watching the parades for hints that the Ukraine war has depleted Moscow’s resources. The defence ministry’s latest public plan for the events shows 30 per cent less military equipment will be on show than last year, although the reasons for this are unclear.

Some have speculated Putin may use his Victory Day speech to announce a mass mobilisation and declare a full-blown war. Officially, the Kremlin has so far avoided calling the conflict a “war”, describing it as a “special operation”.

But according to a Moscow Times report on Friday, state institutions across the country have posted a string of job adverts seeking to hire “wartime mobilisation specialists”.

Although Putin will put on a show of strength on Monday, the event will lay bare Russia’s isolation. 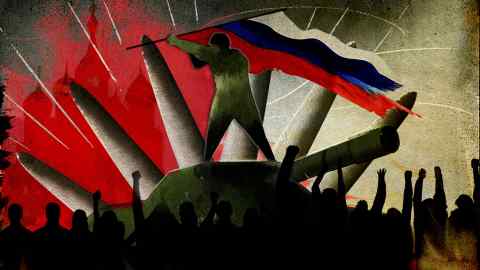 Victory Day has in the past served as a tool of soft power, infusing patriotic feeling in Russian-speaking communities abroad and uniting former Soviet nations whose citizens fought together in the second world war.

But this year Kazakhstan, Kyrgyzstan and Uzbekistan in Central Asia and the Baltic nations Latvia, Estonia and Lithuania have distanced themselves from Russia by cancelling their May 9 parades. Some countries have banned or advised against displays of symbols associated with Victory Day, such as the orange and black striped ribbon of Saint George, because they are now associated with an anti-Ukrainian stance.

World leaders will also be absent; the Kremlin has said it did not invite any. In previous years the guest list has included the leaders of the US, China, India, France and Germany.

The international community will nonetheless be watching. But it may not see what Russia intends, said Gabuev. Moscow aimed to show the world Ukraine did not stand a chance against Russia, he said. “But Russian losses and all the incompetence demonstrated in [the Ukraine] campaign say much more than the exhibition of some equipment or the marching of ceremonial regiments.”

admin - October 1, 2022
0
As the biggest state intervention in modern history to shield British households from soaring energy bills came into effect on Saturday, the focus...

admin - October 1, 2022
0
A federal clerkship is a coveted position. Judges wield vast amounts of power in selecting their clerks–so vast that fear of reprisals have...

admin - October 1, 2022
0
They crossed the border looking exhausted, dragging their suitcases through the mud, but the group of young Russians fleeing the threat of conscription...

Ethereum options points to ‘flippening,’ but surpassing Bitcoin is unlikely

Economist Larry Summers was right before on inflation—and has another contrarian...

The truth is that schools do little to reduce inequality