The US on Sunday targeted executives at Gazprombank for the first time in a new set of sanctions that also bans companies from providing Russia with corporate services such as accounting and consulting.

“We’re sanctioning some of their top business executives, they’re the people who sit at the top of the organisation, to create a chilling effect . . . we don’t want Gazprombank to be seen as a safe haven,” a senior Biden administration official said.

The US official said the sanctions targeting 27 executives of Gazprombank, Russia’s third-largest lender and a subsidiary of state-owned energy company Gazprom, did not freeze the company’s assets or prohibit transactions with it since it is the main way Russia sells gas to Europe. Also targeted are executives of Sberbank, while Russian officials accused of human rights violations will face visa restrictions.

The new package prohibits companies from providing accounting, consulting and other services to Russia to try to prevent Moscow from reformulating business strategies that circumvent the west’s sanctions regime.

“We’re banning the provision of accounting services, management, consulting, marketing — all services that are used to operate multinational businesses, but also to potentially create workarounds from sanctions or to hide ill-gotten wealth,” the official said.

The announcement followed US president Joe Biden’s meeting with his G7 counterparts and Ukraine’s president Volodymyr Zelensky and is part of a co-ordinated show of support for Ukraine ahead of Russia’s Victory Day celebrations on Monday.

US first lady Jill Biden also made a surprise trip to Ukraine on Sunday, in another signal of Washington’s backing as the US has stepped up lethal assistance to Kyiv in recent weeks. She met Ukraine’s first lady Olena Zelenska in a town near the border with Slovakia.

The services ban affects the Big Four accounting firms and consultancies, which have started to pull out of Russia. The exits could take several months, officials at the firms have said.

Legal services will be excluded from the ban, the senior administration official said, so that companies seeking due process through US lawyers can continue to do so. The official added that this could change in the future. 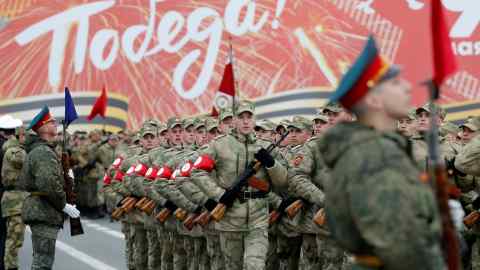 Additionally, the US is banning the export of industrial engines, bulldozers and other industrial supplies, the official said. The EU will impose export restrictions on chemicals.

“These new controls will further limit Russia’s access to components that it needs to replenish and restock its military capabilities,” the senior administration official said.

The EU has been discussing a ban on providing corporate services, including accountancy, as part of its sixth package of sanctions on Russia. EU ambassadors continued negotiations on the package on Sunday but were unable to land a deal given difficulties winning over member states most exposed to the ban on oil imports from Russia, such as Hungary.

The US package also bars firms from advertising on three of Russia’s largest state television companies and prevents the sale of technology such as video cameras, microphones and lighting equipment to these channels.

The G7 said Sunday it was committed to phasing out or banning the import of Russian oil, building on steps the US has already taken to stop Russian energy imports.

admin - October 2, 2022
0
Failed Portland Democrat Mayor Ted Wheeler appeared to laugh and scoff at a woman during a virtual city council meeting when she raised...

admin - October 2, 2022
0
Israel and Lebanon are edging towards a US-brokered agreement to defuse a dispute over their maritime border that has been a long-running source...

Thirteen Lives and the hour of the ordinary hero