Up to 60 civilians are feared dead after a Russian air strike on a school in eastern Ukraine as the country braced for a renewed onslaught by Kremlin forces before its Victory Day parade in Moscow on May 9.

A school in Belogorovka, a village in the Donetsk region close to the front line of fighting between Russian and Ukrainian troops, was hit by a bomb on Saturday, according to the regional administration. Residents of the village were thought to be sheltering in the building and an adjacent cultural centre when it was struck.

Serhiy Haidai, governor of the Luhansk region, said as many as 60 civilians were likely to have died in the blast and ensuing fire and another 30 were rescued from under the rubble. The FT could not independently confirm the scale of the casualties.

Russian forces continued to attack Ukrainian positions along the 1,000km frontline and struck targets with cruise missiles on Saturday, including Odesa. Air raid sirens sounded across much of the country on Sunday morning.

The Ukrainian government has urged the public to stay indoors and heed air raid warnings in anticipation of an uptick in missile and rocket attacks before May 9 when Russia celebrates the Soviet victory over Nazi Germany. Ukrainian officials expect Russian president Vladimir Putin to use the occasion to vaunt his country’s military achievements in Ukraine and possibly to escalate the offensive.

Russian forces pressed on in the north of the Donbas region, where they are looking to bear down and then encircle Ukrainian troops around the cities of Sloviansk and Kramatorsk.

Ukraine’s general staff said on Sunday the Russians had captured the northern outskirts of Shandrygolov, a town north of Sloviansk, and Russian forces claimed to have taken Popasna, where fighting has raged for weeks leaving it almost destroyed. Despite these limited gains, Russia’s advance has largely stalled. 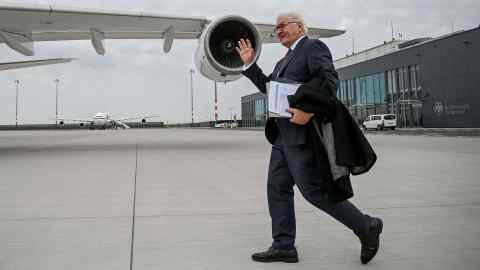 Meanwhile, Ukrainian forces continued to push Russian troops further away from Kharkiv, Ukraine’s second city, providing it with more relief from Russian artillery fire. The Ukrainian operation north-east of the city heading towards the border with Russia has been its biggest counter-attack of the war so far.

President Volodymyr Zelensky said Ukrainian authorities, in conjunction with the UN and International Committee of the Red Cross, were planning to evacuate all medical staff and wounded soldiers from the Azovstal plant, which has become the last hold out of Ukrainian resistance in Mariupol.

All remaining women, children and seniors were evacuated from the steelworks in the south-eastern port city on Saturday, according to the deputy prime minister Iryna Vereshchuk. In total 300 civilians have been freed from the plant.

Zelensky has also called for Ukrainian military personnel — thought to number between several hundred and 2,000 — to be allowed to leave the vast facility. He said on Friday international diplomatic efforts were under way to secure their safe passage.

The next phase of the evacuation would be “extremely difficult” but “we do not lose hope,” Zelensky said.

How much protein do I need in a day?

Companies should be guided by their purpose and values when deciding...

The ECB turns the tables on panicky markets and policymakers