The Taliban have ordered all women in Afghanistan to cover their faces in public, the latest in a series of policies that have systematically eroded women’s rights and liberties in the country despite earlier assurances.

The Islamist group’s ministry for the propagation of virtue and prevention of vice, a religious police force, announced the restriction on Saturday, citing a decree from the Taliban’s supreme leader Hibatullah Akhundzada.

The order added that an ideal covering for women was the burka, a head-to-toe garment which is already widely worn in the country but was mandatory under the group’s repressive rule in the 1990s.

The Taliban also decreed that women should only leave the house when necessary, with the male relatives of rule-breakers liable to face punishment.

In March, the Taliban reversed a decision to let teenage girls back to secondary school, after having repeatedly claimed they would be allowed back into education.

The latest ruling “contradicts numerous assurances regarding respect for and protection of all Afghans’ human rights, including those of women and girls”, the UN Assistance Mission in Afghanistan said in a statement.

António Guterres, the UN’s secretary-general, wrote on Twitter that he was “alarmed” by the order, adding: “I once again urge the Taliban to keep their promises to Afghan women and girls, and their obligations under international human rights law.”

The reimposition of hardline policies in recent weeks suggested that the Taliban was reviving many of the notorious restrictions on women’s education, work and freedoms that characterised the Islamist group’s previous reign from 1996-2001.

The Taliban returned to power in August last year, overthrowing the western-backed government as Nato troops departed following a two-decade occupation of Afghanistan.

The group had vowed at the time to protect women’s rights within the bounds of their interpretation of Islamic law, part of an effort to present a more moderate image to foreign governments and donors.

Those assurances also came as the Taliban sought international recognition for their regime in order to unblock the country’s frozen foreign currency reserves and recoup some of the aid that made up the majority of the previous government’s budget. 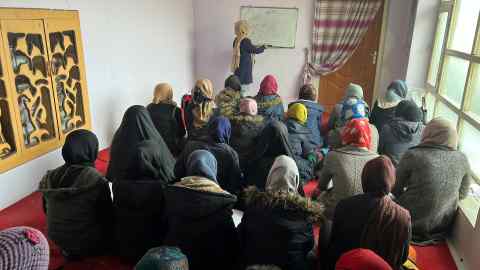 Governments including the US have however been mostly unwilling to engage with the Taliban, arguing that they needed first to see progress on critical issues such as women’s rights.

Analysts and diplomats have argued that the recent decrees showed that hardline clerics within the Taliban leadership had reasserted their control over policymaking, adding further obstacles to international engagement.

“The world is shamelessly watching the violence against women by the Taliban,” said Selay Ghaffar, an Afghan political activist.

Afghanistan is also suffering through an unprecedented economic and humanitarian crisis that has left nine out of 10 people without enough food, a figure that rises to almost 100 per cent in female-led households, according to UN estimates.

admin - October 2, 2022
0
Liz Truss, prime minister, has admitted that mistakes were made in the controversial “mini” Budget that sparked market turmoil last week, as she...

admin - October 2, 2022
0
What the country needs, I am now convinced, is a self-help group for writers of political booklets. A sort of Pamphleteers Anonymous, where...

admin - October 2, 2022
0
Indonesia is struggling to attract foreign investors to fund the development of a $32bn new capital city on the jungle-clad island of Borneo...