Boris Johnson will attempt to re-energise his faltering government this week with a new legislative programme intended to show he has ideas to improve voters’ lives after the Conservative party’s dire local election results.

The prime minister is facing calls from Tory colleagues to put a particular focus on winning back voters in the so-called “blue wall” after a disastrous showing by the party in London and the south of England and Scotland.

Despite losses of about 400 seats across Britain in the local elections, Johnson has nevertheless secured some political breathing space: there has been no immediate clamour from Tory MPs for him to quit.

Indeed, Sir Keir Starmer’s problems over “beergate”, an investigation by police into a beer and curry evening attended by the Labour party leader in Durham last year during lockdown, has boosted Johnson’s confidence that he can turn a political page.

On Tuesday, Johnson will put forward legislation for the third, crucial parliamentary session spanning 2022-23 in the Queen’s Speech. After this session, the next election will be coming into view.

Downing Street is expected to prioritise bills that it thinks will have an electoral impact, including a levelling up and regeneration bill, intended to breathe new life into faded town centres.

A schools bill is intended to raise education standards in England, including supporting schools to join multi-academy trusts, introducing registers for children not in school and giving Ofsted, the education inspectorate, more powers to crack down on unregistered schools operating illegally.

We’re going to be talking about reforming the agricultural sector, innovation to create cheaper, healthier food.

Other legislation includes a bill to create a new regulatory framework for Britain’s railways; a measure to speed up the repeal of EU law from the British statute bill; and a financial services bill, setting up post-Brexit regulation to capitalise on new areas including cryptocurrencies.

Among the surprise measures to be included is a short electronic trade documents bill, following work by the independent Law Commission, which found this year that global trade was generating billions of paper documents a year, adding big costs to business.

“The potential positive impacts of using electronic trade documents — including financial and efficiency gains, and environmental benefits — are vast,” the commission said.

“Despite the size and sophistication of this market, many of its processes, and the laws underlying them, are based on practices developed by merchants hundreds of years ago,” it said, adding that most documents used in international trade were still in paper form.

digital secretary Nadine Dorries, is intended to help the move to digital-based transactions with the aim of saving British businesses at least £1.7bn a year, according to officials briefed on the measure.

Dominic Raab, deputy prime minister, denied the Queen’s Speech would be a “reset” moment, but said: “We’re going to be talking about reforming the agricultural sector, innovation to create cheaper, healthier food.

“We’re going to be talking about areas where Britain has a real comparative advantage, tech, financial services,” he told Sky News.

However, the Queen’s Speech is unlikely to transform Johnson’s fortunes; the mounting economic crisis and its impact on living standards looks set to dominate politics until a general election, which must take place by 2024.

Last week’s council results have caused alarm among Tory MPs across the south, with Labour taking the former Conservative strongholds in London of Wandsworth, Westminster and Barnet.

Meanwhile, the Liberal Democrats were the main beneficiaries of a collapse in Tory support across the wider south; the party won control of Somerset and Woking. In the wealthy London borough of Richmond, the Tories were left with only a single seat out of 54.

“Boris has toxified the Tory party,” said one senior Conservative MP representing a southern constituency. “Brexit was the start of it — people don’t forget things like that.

“They also feel that he lied to help secure Brexit, so the partygate affair has reinforced the idea that you can’t trust him. And people don’t like the culture war stuff, like sending migrants to Rwanda,” they added. 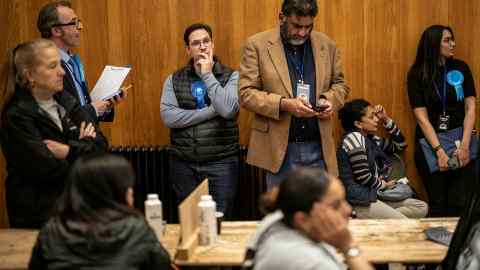 Damian Green, a former cabinet minister, wrote in the Sunday Telegraph that Johnson ignored “Southern discomfort” at his peril and warned that the politics of division alienated middle class voters.

He said that southern Conservatives “want a government that seeks to unite society and resists the urge to declare culture wars on institutions like the judiciary or the BBC. They believe Conservatism involves respect for institutions, not a revolutionary desire to smash them up”.

At the same time, some southern Tory MPs believe that Johnson’s “levelling up” agenda sounds like a policy for the North and that their voters feel neglected, according to South West Devon MP Gary Streeter.

But Johnson needs to tighten his grip on newly-won Tory seats in the north and the Midlands if he is to retain power; holding together a coalition spanning seats like Hartlepool in the north-east and Guildford in the south will be a challenge.

Meanwhile, cabinet ministers and Tory MPs are adding pressure on Johnson, and his chancellor Rishi Sunak, to cut taxes to alleviate the cost of living crisis.

Sunak, writing in the Mail on Sunday, said: “I know many families are still struggling with the cost of living and we will do all we can to help people with their energy bills in the autumn, when we know more about what prices will be then.

“We will do everything we can to ease the squeeze for families.”

admin - October 1, 2022
0
As the biggest state intervention in modern history to shield British households from soaring energy bills came into effect on Saturday, the focus...

admin - October 1, 2022
0
A federal clerkship is a coveted position. Judges wield vast amounts of power in selecting their clerks–so vast that fear of reprisals have...

Should ESG get a new name? These finance leaders say yes