South Korea’s economic recovery slowed in the first quarter of 2022 as concerns mounted over persistent inflation and weakening demand owing to lockdowns in China.

South Korean domestic product expanded 3.1 per cent on an annualised basis in the first quarter, down from 4.2 per cent in the last quarter of 2021.

Exports remained strong, growing 4.1 per cent on the previous quarter thanks to strong demand from the US, Europe and Vietnam. But analysts noted that exports fell in early April because of weak Chinese demand, warning that the effects of war in Europe and lockdowns in China would manifest in the coming months.

“The virus and war impacted Korean domestic consumption and investment, but exports were strong, driving Q1 growth,” said Park Chong-hoon, head of Korea research at Standard Chartered. “If exports slow due to China’s lockdowns, the growth impact will be problematic. We can already see manufacturing business sentiment deteriorating because of this concern.”

Goohoon Kwon, senior Asia economist at Goldman Sachs, said: “We see Taiwan and Korea, followed by a number of Asean economies, as being the most vulnerable to the latest tightening of Covid restrictions in China, due to their exposure to supply chains and domestic demand in mainland China.”

Authorities are expanding mass testing in Beijing after detecting community transmission of Covid-19 in the Chinese capital, heightening fears of a citywide lockdown. Shanghai, China’s financial centre, has been locked down for more than three weeks.

South Korea ditched all remaining social-distancing measures this month, downgrading Covid to a “Class 2” disease alongside conditions such as tuberculosis and cholera.

Krystal Tan, an economist at ANZ Research, said in a research note that Korean domestic demand would probably improve just as “the external environment has turned more challenging”.

“An improving virus situation and the associated reopening will pave the way for a rebound in domestic demand,” said Tan. “On balance, South Korea’s economy should continue to recover, albeit at a slower pace.”

Inflation in Asia’s fourth-largest economy hit 4.1 per cent in March, more than double the Bank of Korea’s target range and up from 3.7 per cent in February.

This month, the BoK increased its benchmark interest rate for the fourth time since August to 1.5 per cent, its highest level in almost three years. 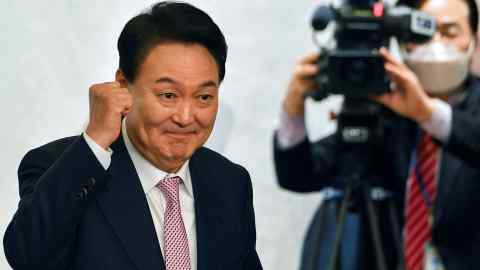 Rhee Chang-yong, the BoK’s newly confirmed governor, said on Monday that he “was more worried about inflation” than about the country’s growth prospects, but added he would “still need to look at the data to tell what the pace of interest rate hikes should be”.

Rhee, a former senior IMF official, also said that he “would like to be a dove when it comes to long-term growth, and I believe that will be possible”.

Park, of Standard Chartered, said that “inflation is likely to remain above 4 per cent for a couple of months. The BoK will raise interest rates to fight back, leading to economic slowdown.”

Biden attacked for ’living in a green hallucination’

The tyranny of having a hobby