Conservative MPs are bracing themselves for the loss of hundreds of seats in next week’s local elections, after spending the weekend hearing voters on the doorstep lamenting Boris Johnson’s leadership.

Some Tory MPs believe a bad set of results on May 5 could be the trigger for a vote of confidence in the prime minister, who now has three separate probes into the partygate affair hanging over him.

A ConservativeHome survey published on Sunday found that 58 per cent of Tory members believe the partygate scandal was being overblown by the media and was not important to voters.

But one MP from a wealthy Tory constituency said: “Partygate is still coming up on the doorstep. People are raising the prime minister’s leadership. My fear is they will simply stay at home.” He also predicted the loss of hundreds of council seats.

Another Conservative MP, critical of Johnson, said: “People will come after him after the elections. He’s an existential threat to the Conservative party and to democracy.”

Johnson, who has been fined over a party in Downing Street for his birthday in June 2020 that broke Covid-19 rules, faces the possibility of more police fines over his attendance at other lockdown gatherings in Downing Street. He also faces a new inquiry by MPs into whether he deliberately misled parliament on the issue.

He is also expected to receive a damning assessment of his leadership by Sue Gray, the senior civil servant charged with investigating the partygate affair, whose full report has yet to be published.

One Whitehall official who has worked on the Gray inquiry described its contents as “bad” for the prime minister. “There isn’t much escaping the fact that the prime minister’s leadership is poor and Sue has been very critical of that,” the person said.

Another person with knowledge of the situation said that whether the criticism would prove terminal for Johnson was “subjective”. The official added: “Under normal circumstances, it would be difficult to see how the PM could carry on. But this PM is very different.”

Gray published a short draft of her report in February, before the Metropolitan Police opened its investigation, Operation Hillman, into partygate. Once the latter is complete, Gray will finalise her report and Downing Street has said it will be published. 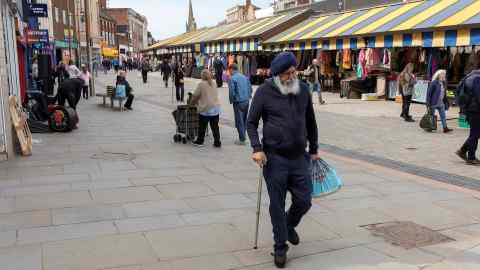 One ally of Gray said there was “no indication of timing” about when it would be published. “We are entirely in the hands of the Met and they have not been exactly communicative throughout this process.”

One Tory backbencher said: “Partygate has not gone away by any means and has the potential to flare up again. The local elections will be a trigger point for disgruntled MPs.”

A former minister said: “Many people are holding back.” He said that things could come to a head in the summer, following the May 5 elections, the conclusion of the Met Police inquiry and publication of the Gray report.

Voyager pushes back on crypto billionaire Sam Bankman-Fried’s offer to get...