The largest US banks are set to report their biggest slowdown in investment banking revenue in years next week, as the dealmaking engine that helped propel Wall Street to record profits last year sputters.

Banks started the year braced for a slowdown in dealmaking activity following a blockbuster 2021 supported by markets and widespread stimulus measures. The first quarter of 2021 in particular was a lucrative three months in which banks minted fees from a boom in initial public offerings of special purpose acquisition companies.

The slowdown has been worse than expected. Bank executives have blamed Russia’s invasion of Ukraine and the subsequent market volatility. Equity capital markets and IPOs in particular have slowed dramatically in recent weeks.

“For the first quarter, year over year, we were probably expecting capital markets revenue to be down like 10 to 20 per cent [at the start of 2021], as a range across the banks. And now we’re down 30-50 per cent. It’s pretty materially weaker,” said Matt O’Connor, head of large-cap bank research at Deutsche Bank.

On average, those banks are expected to report a 26 per cent drop in investment banking fees, according to estimates compiled by Bloomberg. On average, analysts are forecasting overall revenues at the banks to fall around 10 per cent.

The hope among bank executives is that the current market volatility is merely delaying deals that will eventually get done later in the year, though doubts are emerging about how temporary this slowdown will be.

“With every week and month that goes by with this kind of market volatility and macro uncertainty, we become more concerned. I think investors are probably more concerned than even the consensus estimates suggest,” said Jeff Harte, senior research analyst at Piper Sandler.

One positive for banks is expected to be revenue from trading, which probably held up better than many were expecting during the recent market swings, and should experience smaller declines than investment bank work advising on deals.

Speaking at a conference in early March, Troy Rohrbaugh, head of global markets at JPMorgan, said the bank’s quarter-to-date performance was down 10 per cent in trading.

“In our view commodities trading is the best performing asset class with [Goldman Sachs] the main beneficiary, being the largest commodity player by revenues in our coverage,” JPMorgan analysts wrote in a research note this month. 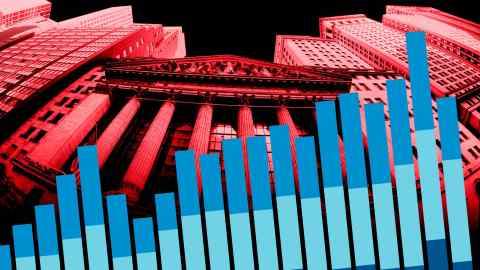 Banks went into 2022 with the expectation that any slowdown in investment banking or trading would be offset by an eagerly anticipated move by the Federal Reserve to lift interest rates for the first time in years, as well as rising demand for loans as cash reserves from pandemic-era government stimulus programmes faded.

Higher rates should help banks make more money from the loans they issue, and some analysts are hopeful banks will lift guidance on the amount they will earn from net interest income for 2022.

However, the rapid pace at which the Fed may now lift rates to combat inflation is feeding anxiety that the US economy could dip into a recession.

“While the banks have several potential tailwinds ahead including higher interest rates and accelerating loan growth, tail risks have clearly increased due to the war, including a higher probability of recession as the Fed raises rates quickly to bring down inflation,” Morgan Stanley analysts wrote in a research note.

‘Inaction is paralysis’: CFTC Chair Rostin Behnam calls for regulation in the wake of FTX’s collapse

Microsoft woos Brussels as battle over the cloud intensifies

Jerome Powell says a half-point interest rate hike is on the...