One of the UK’s biggest mortgage lenders will begin offering five and 10-year fixed rate mortgages at lower rates of interest than its two-year home loans, overturning borrowers’ expectations of mortgage pricing.

Halifax, which is part of Lloyds Banking Group, will from Monday offer a five or 10-year fixed rate deal at 2.48 per cent for those with a deposit of 40 per cent or more, compared with its two-year equivalent of 2.54 per cent, all with a fee of £999.

Mortgage borrowers have historically paid more for the security of a five or seven-year fix, which gives them confidence that their monthly repayment costs will not jump unexpectedly in the short term.

But rates on two, five, seven and 10-year fixes have narrowed sharply in recent months, as the cost of short-term funding for lenders has risen and borrowers have sought longer-term products to protect them from rising interest rates.

“It’s pretty unheard of in the mortgage market,” said Aaron Strutt, technical director at broker Trinity Financial. “It seems like the normal form book has gone out of the window.”

Lenders use swap rates to guide their decisions on mortgage pricing and shorter-term swaps are currently more expensive than longer-term swaps. These rates reflect a belief in financial markets that the Bank of England’s main interest rate will continue to rise until the end of next year and subsequently flatten or decline.

“It’s all about the cost of institutional borrowing. Banks are able to get debt at a cheaper price in the long term than the shorter term,” said Simon Draper-Coates, associate director at mortgage broker Private Finance.

Banks also benefited from having borrowers on longer-term fixes, he added, because repayments over five years were more profitable than over two.

The combination of rising inflation, the war in Ukraine and a continued rise in UK house prices had caused a wider shift in sentiment, said Draper-Coates. “Since the financial crisis, everyone wanted short-term rates because the reality was at the end of your term rates were going to be cheaper. Now we’re in a completely different environment where rates are going up. As a consumer, you’re better locking in for a longer-term deal.” 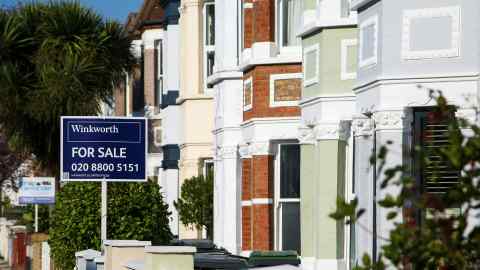 As a major high street lender, Halifax’s decisions are closely watched by rivals. If its pricing changes lead borrowers to look elsewhere for shorter fixes and poaches business for longer loans from its competitors, other lenders are likely to follow its lead.

Ray Boulger, senior technical manager at mortgage broker John Charcol, said: “Once you see one of the major lenders doing something, the other lenders are going to decide how they need to respond. If they feel their applications are getting unbalanced, they’re going to want to react to that.”

The upward trajectory of house prices has yet to be checked by concerns over inflation. In its monthly house price index, Halifax on Friday said prices had risen by 11 per cent in the year to March 2022 — its highest level since mid-2007.

Amid investigations and stock declines, Coinbase releases a Bored Ape and...