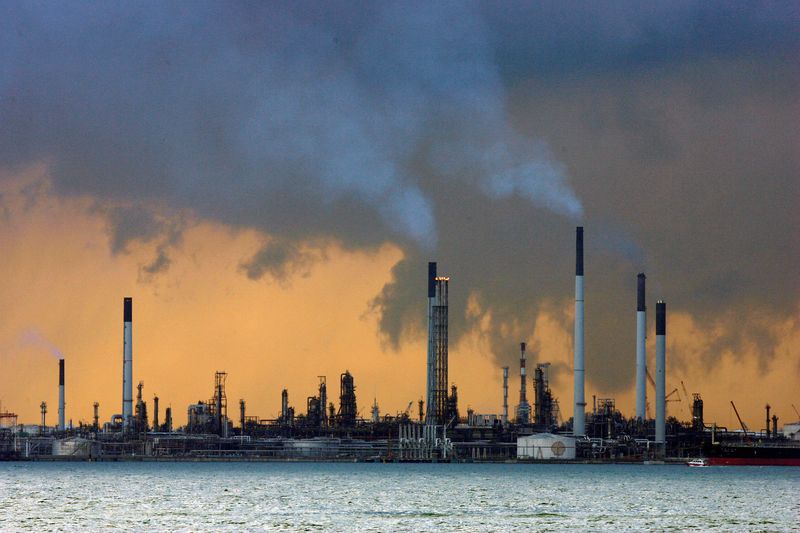 © Reuters. FILE PHOTO: A view of an oil refinery off the coast of Singapore March 14, 2008. REUTERS/Vivek Prakash

LONDON (Reuters) -Investor positions in crude and refined products steadied last week, after heavy sales in the two previous weeks, as fund managers tried to balance opposite risks from sanctions on Russia and a potential global recession.

Hedge funds and other money managers purchased the equivalent of 16 million barrels in the six most important petroleum-related futures and options contracts in the week to March 22 (https://tmsnrt.rs/3LCWUxl).

Portfolio managers are trying to balance risks to global supply from a possible disruption of Russian crude, heavy fuel oil and diesel exports with the threat to global demand from a possible recession and lockdowns in China.

On the crude side, bullish long positions outnumbered bearish short ones by a ratio of just 4.65:1, very close to the long-run average and in the 52nd percentile for all weeks since 2013.

But the acute shortage of diesel and gas oil was reflected in a ratio for middle distillates of 5.16:1, in the 78th percentile.

Elevated volatility in futures prices is making it increasingly expensive to maintain existing positions or initiate new ones.

The total number of open futures positions across all six contracts for all traders fell by 85 million barrels to 5.188 billion last week, the lowest since June 2015, and down from 6.200 billion before Russia’s invasion of Ukraine.

John Kemp is a Reuters market analyst. The views expressed are his own

How Amazon’s unlikely union reflects the changing face of US labour...