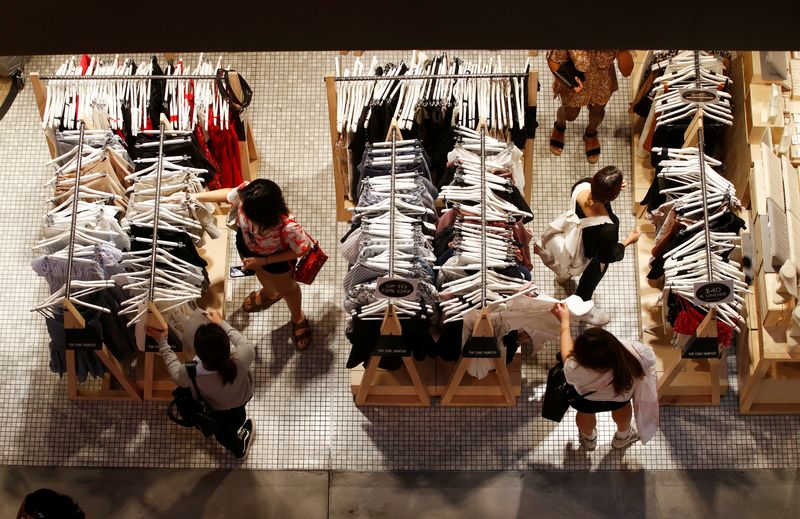 SYDNEY (Reuters) – Australian retail sales beat forecasts again in February as shoppers defied storms and coronavirus waves to return to cafes and department stores for the second-best month ever of spending.

Data from the Australian Bureau of Statistics out on Tuesday showed retail sales climbed 1.8% in February from the previous month to A$33.1 billion ($24.76 billion), handily beating forecasts of a 1.0% gain.

That left sales up a huge 9.1% on February last year and followed a surprisingly upbeat 1.6% gain in January, suggesting household spending overall was set for a strong first quarter.

Cafes and restaurants saw gains of 9.7% in February, from the previous month, while the department store and clothing sectors both climbed more than 11%.

The splurge looks to have continued with the latest card data from Commonwealth Bank of Australia (OTC:) (CBA) showing further gains in the two weeks to March 25 as flooding on the east coast caused only a brief dip.

The record cost of petrol has been punishing for consumer sentiment, however, with ANZ Bank’s weekly survey showing the mood on personal finances was the worst since the depths of the pandemic in mid-2020.

The rising cost of living has become a hot political issue ahead of an election expected in May and the government will try to use its budget later on Tuesday to appease voters with cash handouts and temporary cuts to fuel taxes.

The ANZ survey also showed consumer inflation expectations surging to decade highs, a headache for the Reserve Bank of Australia (RBA) which is weighing when to start raising interest rates from all-time lows of 0.1%.

The central bank has said it would be patient in the hope wages would pick up, and a hike was likely later in the year.

Markets are wagering it will have to act much more aggressively to head off inflation and have a rise to 0.25% priced in by June, and then a string of hikes to at least 1.75% by year end.

Abortion: what reversing Roe vs Wade would mean for American women