Rishi Sunak has admitted that the UK’s dismal recent trade performance compared with other G7 countries “might well be” because of Brexit.

The chancellor, who supported Britain’s exit from the EU, also told MPs on Monday he knew in advance that Brexit would affect trade, although such admissions by Leave campaigners were rare at the time of the 2016 referendum.

“It was always inevitable if you change the exact nature of your trading relationship with the EU, that was always going to have an impact on trade flows,” Sunak told the House of Commons Treasury select committee.

His comments were a rare recognition from the chancellor that his own political choice in 2016 was contributing to Britain’s economic problems.

The chancellor was answering questions about last week’s Spring Statement and was asked why Britain’s trade performance had failed to recover from the pandemic as quickly as all other advanced economies.

Sunak said the picture remained unclear and that it was “too early to be definitive”, saying that officials from the Treasury were trying to establish the exact causes.

But Mel Stride, Tory chair of the committee, asked whether the main difference between Britain and other G7 countries was “we went through Brexit and they didn’t”. Sunak replied: “It might well be.”

The Office for Budget Responsibility, the independent fiscal watchdog, last week held to its assumption that “leaving the EU will result in the UK’s total imports and exports being 15 per cent lower than had the UK remained a member state”.

The OBR added: “This fall in the trade intensity of UK output is likely to reduce the level of potential productivity, though the size of this effect is uncertain; we assume productivity is ultimately 4 per cent lower after a 15-year period.”

A separate report by the Netherlands Bureau for Economic Policy Analysis, part of the Dutch economic affairs ministry, found last week that the volume of UK goods exports fell 14 per cent in the three months to January, compared with the same period in 2020.

This was in stark contrast to the global average of an 8.2 per cent rise over the same period.

Sunak insisted on Monday it was “a bit early to be definitive” about why this was happening.

He said that over time Britain would increase trade with other parts of the world, but he admitted: “That doesn’t happen overnight.”

The chancellor, widely criticised for failing to do enough to address the cost of living crisis in last week’s Spring Statement, defended his package of measures to MPs.

They included an increase in the threshold for paying national insurance contributions that would cost £6bn, a £2.4bn cut in fuel duty and the prospect of a £5bn cut in the basic rate of income tax in 2024. 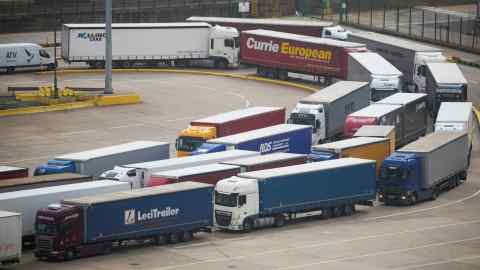 Sunak said he would be prepared to intervene again in the autumn if domestic energy bills rise sharply; the OBR predicted that the energy price cap could rise from £1,977 from April 1 to £2,800 in October.

He would “act if necessary” if energy bills rise again in the autumn, but he wanted to wait: “It clearly is very difficult today to speculate on energy prices in the autumn,” Sunak said. “Let’s wait until we get there.”

He also said he was “comfortable with the choices I’ve made”, even though there was little in his Spring Statement to help people on very low incomes who were unable to work.

The chancellor said his main priority from now on was to cut taxes and that he would resist pressure for higher borrowing and higher spending, which he said risked fuelling inflation.