Russia is no longer requesting Ukraine be “denazified” and is prepared to let Kyiv join the EU if it remains militarily non-aligned as part of ongoing ceasefire negotiations, according to four people briefed on the discussions.

Moscow and Kyiv are discussing a pause in hostilities as part of a possible deal that would involve Ukraine abandoning its drive for Nato membership in exchange for security guarantees and the prospect to join the EU, the people said under the condition of anonymity because the matter is not yet finalised.

The draft ceasefire document does not contain any discussion of three of Russia’s initial core demands — “denazification”, “demilitarisation”, and legal protection for the Russian language in Ukraine — the people added.

Envoys from both sides are to meet in Istanbul on Tuesday in a fourth round of peace talks designed to end president Vladimir Putin’s full-scale invasion of Ukraine. The concessions on Russia’s side come as its month-long ground offensive has largely stalled as a result of fiercer Ukrainian resistance than expected and Russian operational deficiencies.

But Ukraine and its western backers remain sceptical of Putin’s intentions, worrying that the Russian president could be using the talks as a smokescreen to replenish his exhausted forces and plan a fresh offensive.

David Arakhamia, head of Ukrainian president Volodymyr Zelensky’s party in parliament and a member of Kyiv’s negotiating team, told the FT the parties were close to agreement on the security guarantees and Ukraine’s EU bid but urged caution about prospects for a breakthrough.

“All the issues” have been “on the table since the beginning” of negotiations but “lots of points — like in every single item there are unresolved points”, Arakhamia said.

Another person briefed on the talks said Ukraine was concerned that Russia was shifting its position almost day by day, both in terms of military pressure and on demands like Kyiv’s “demilitarisation.”

Russia “can’t and won’t talk about progress” because “it could only harm the negotiating process”, Dmitry Peskov, Putin’s spokesman, was quoted by Interfax on Monday. “For now, unfortunately, we cannot speak of any significant achievements and breakthroughs”, he added. 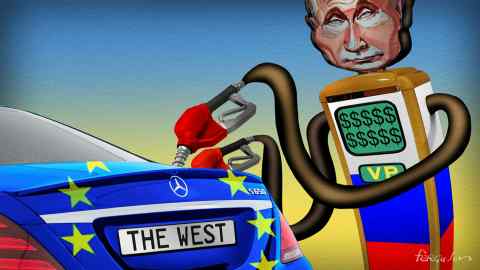 As part of the agreement under consideration, Ukraine would also refrain from developing nuclear weapons, or hosting foreign military bases in addition to abandoning its pursuit of Nato membership.

In exchange, Ukraine would get what Arakhamia called “wording close to Nato’s Article 5” — whereby the alliances’ members must come to each others’ aid if one is attacked — for security guarantees from countries including Russia, the US, the UK, Canada, France, Germany, China, Italy, Poland, Israel, and Turkey.

Any prospective agreement, however, would have to be agreed with the guarantors and ratified by their parliaments, Zelensky said on Sunday.

The prospective guarantors have yet to agree to uphold Ukraine’s security, the people said. “We do not have any rejections so far,” Arakhamia said.

Ukraine would put the deal to a referendum in several months’ time before changing its constitution, said Zelensky — a process that could require at least a year.

“The only resolved [issue] is the type of international guarantees Ukraine is looking for, but . . . we still have to get the approval from the guarantors otherwise the deal will never fly,” Arakhamia said.

The draft communiqué under consideration leaves the biggest sticking point — Ukraine’s attempts to reclaim territory seized by Russia since 2014 — to be settled in a tentative future discussion by Putin and Zelensky, the people said.

Moscow, Arakhamia said, was demanding that Ukraine recognise Russia’s control over the Crimean peninsula, which Moscow annexed in 2014, as well as two territories run by Russian-backed separatists in the eastern Donbas region.

“We will never recognise any kind of borders except as they are in our Declaration of Independence,” Arakhamia said. “This is the most critical point.”

For now, Ukraine was prepared to discuss some humanitarian issues, such as restoring Crimea’s water supply and pledging never to try to retake the peninsula by force, the people said.

If a ceasefire holds, Ukraine and Russia’s foreign ministers would then meet to draft separate documents to finalise the security guarantees and further agreements on social issues such as protection of the Russian language in Ukraine. This would then be followed by attempts to arrange a meeting between Putin and Zelensky, although Peskov on Monday said there had been “no movement” on arranging such an encounter.

admin - February 5, 2023
0
US soldiers fighting on an Abrams tank named Red Ace during the 1991 Gulf war had to be meticulous about keeping the desert...

Why nutmeg is so precious