After the miserable ratings of last year’s coronavirus-tainted Oscars show, the Academy of Motion Picture Arts and Sciences looked for ways to speed up the ceremony and reconnect with the zeitgeist.

Sunday’s broadcast of the Oscars certainly succeeded in making headlines — though not in ways the Academy could have expected — after an extraordinary moment when the actor Will Smith charged the stage and slapped comedian Chris Rock. Rock had made a joke about Smith’s wife, Jada Pickett Smith, who has a shaved head and has spoken publicly about her hair loss.

In the US, audio was cut from the broadcast as Smith yelled profanities at Rock after returning to his seat. Later in the show, Smith won the Best Actor award for his performance in King Richard and gave a long, rambling speech in which he called himself “a fierce defender of his family”. The actor also apologised to the Academy, but not to Rock.

Going into the ceremony, the focus was on the contest between Apple and Netflix, which were vying to become the first streaming service to win the Best Picture award. Both had spent tens of millions of dollars campaigning for the Oscar, which would send a strong message to filmmakers and A-list actors about the ability of tech groups to deliver Hollywood’s top prize.

In the end, CODA, Apple’s first-ever Oscar nominee, emerged as the Best Picture winner. It was the first film to win the top Oscar after debuting at Sundance, the independent film festival, and as with other streaming nominees, was released in a limited number of cinemas to qualify for the award. CODA also earned the Oscars for Best Adapted Screenplay and Best Supporting Actor.

The win by Apple, the world’s most valuable company, will be seen as deeply symbolic in Hollywood, where traditional studios have been disrupted by streaming services.

It also came after a tumultuous year for the industry. Not only did Covid-19 weigh heavily on cinema attendance, but 2021 marked a moment when the financial underpinnings of the film business began to unwind. Big film studios, including Disney and Warner Bros, released movies directly on to their streaming services instead of allowing an exclusive run in theatres, threatening the performance-related bonuses that top talent have come to expect. 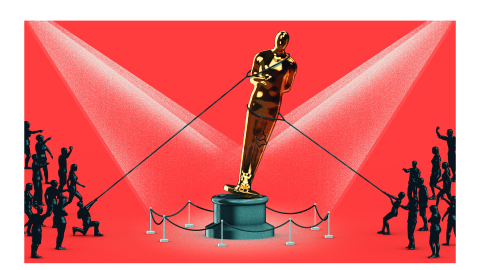 This has created tension in Hollywood between the studios, which view streaming as the future of the industry, and directors, producers and actors

Netflix, the streaming industry pioneer, had been the favourite at this year’s Oscars with The Power of the Dog, which entered the ceremony with 12 nominations after enjoying a strong run at the Golden Globes. Netflix also had a Best Picture nominee in the political satire Don’t Look Up, starring Leonardo DiCaprio and Jennifer Lawrence.

But The Power of the Dog took home only one Oscar, with Jane Campion winning the award for Best Director.

In contrast with Apple, a relative newcomer to streaming, Netflix has worked for years to enter Hollywood’s bloodstream. Ted Sarandos, its co-chief executive, serves as the head of the Academy Museum, which opened last autumn to great fanfare. The company also waged an expensive campaign for its first Best Picture nominee, Roma, in 2019.

Some Academy members have blamed the ceremony’s rating decline — only 10.4mn Americans watched last year’s awards, a 56 per cent drop from a year earlier — on a failure to nominate commercially popular films. But Dune, which has taken in more than $400mn, was the biggest winner of the night, with 10 awards.