Energy ministers of the G7 group of major economies rejected Vladimir Putin’s demand on Monday that Russian gas should be paid for in roubles in a stand-off that is raising new doubts about the fuel’s supply to Europe.

The officials unanimously rejected the Russian president’s calls for “unfriendly” countries to pay for gas imports in roubles instead of currencies such as euros and dollars, Robert Habeck, Germany’s economics and energy minister, told journalists on Monday in Berlin.

The statement raised the possibility of gas supplies to Europe being cut off should the two sides be unable to agree on a payment currency. Habeck said G7 countries were “prepared” for “all scenarios”, including a potential halt to Russian energy supplies.

Putin announced last week that Moscow would begin to invoice European gas buyers in roubles, Russia’s latest response to unprecedented western sanctions imposed in a bid to punish him for the invasion of Ukraine.

Habeck — who was speaking after a virtual meeting with ministers from the US, UK, France, Japan, Italy and Canada — said: “All G7 ministers totally agreed that [requiring payment in roubles] would be a clear and unilateral violation of existing contracts.”

Western companies typically agree long-term supply agreements for Russian gas imports and it remains unclear how Moscow will try to implement any change in payment currency. Analysts said most agreements were negotiated in international currencies and it was unlikely they contained clauses to allow for payments in roubles.

European importers of natural gas, including France’s Engie and Austria’s OMV, have said that supply contracts do not include clauses that allow for payment in roubles. They said they intend to continue paying in euros or dollars as specified in their existing deals. 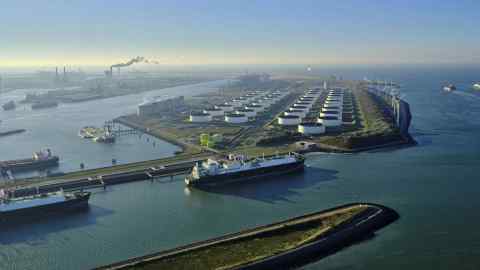 Habeck said Putin’s move to bill Russian energy in roubles showed that he “has his back to the wall” because sanctions were seriously harming the Russian economy.

Laurent Ruseckas, executive director of gas in Europe, Middle East and Africa at S&P Global, said the EU and Russia were engaged in brinkmanship over the flow of gas supplies. If the EU were to introduce a law against paying in roubles, then “either someone blinks, or you go into force majeure”, meaning gas supplies to Europe would be cut off.

If Russian law mandates payment in roubles, state-owned companies such as Gazprom — Russia’s biggest gas supplier — would have to initiate discussions on modifying contracts. That would create a chance for European utilities to seek to renegotiate contract lengths and supply volumes, industry executives say.

Ruseckas said Russia appeared to be adopting an “orderly” approach to switching the payment currency for gas purchased by “unfriendly” countries, even though few signs were emerging of buyers being ready to comply without any concessions.

Officials from Gazprom, the government and the central bank will report to Putin on Thursday on how to implement plans to convert payments into roubles, according to Interfax.

European gas prices were relatively steady on Monday with Front-month futures contracts tied to TTF, Europe’s wholesale gas price, rising as much as 10 per cent to €109 per megawatt hour, before easing back.

Analysts said prices would probably have dropped without the uncertainty over payment terms because Europe had significantly replenished its gas storage levels over the weekend, lifting them to almost double the low they hit in 2018.

The EU has avoided sanctioning energy imports from Russia directly. However, European energy buyers could struggle to find a bank compliant with sanctions to convert euros to roubles. The EU could also respond with its own sanctions to prevent exchanges of euros into roubles.

Germany unveiled targets last week to cut dependence on Russian energy rapidly, vowing to all but wean itself off the country’s gas by mid-2024 and become “virtually independent” of its oil by the end of this year.

China strengthens warning to US about Pelosi’s planned Taiwan trip