Britons face a “historic shock” to their incomes this year sparked by surging energy prices that will hit UK economic growth and consumer demand, Bank of England governor Andrew Bailey warned on Monday.

Bailey said Russia’s invasion of Ukraine would fuel the UK cost of living crunch, adding the energy price shock in 2022 would be larger than during any single year in the 1970s.

The BoE governor sounded the alarm on so-called stagflation, suggesting slowing economic growth and soaring inflation posed the biggest challenge to the central bank’s Monetary Policy Committee since its creation in 1997.

Surging energy prices are a key factor behind UK consumer price inflation reaching a 30-year high of 6.2 per cent in February, more than three times the BoE’s 2 per cent target.

The BoE expects Russia’s war in Ukraine to help push inflation to about 8 per cent in the second quarter of this year. It said this month inflation could potentially climb even higher in the autumn, when regulated energy prices are due to increase further.

The shock from energy prices this year will be larger than any single year in the 1970s.

Bailey said Britons were facing a “very large shock to aggregate real income and spending” from rising prices of energy and imported goods.

He told an event organised by Bruegel, the think-tank, in Brussels: “This is really an historic shock to real incomes.”

Bailey said Russia’s invasion of Ukraine had exacerbated the energy supply shock, adding: “The shock from energy prices this year will be larger than any single year in the 1970s. The caveat is that the 1970s had a succession of years and we very much hope that would not be the case now. But as a single year, this is a very, very big shock.”

UK inflation spiralled upwards during the 1970s after Arab members of Opec, the cartel of oil producers, imposed a crude embargo on countries that had supported Israel in the Yom Kippur war.

Bailey said the UK and the eurozone were confronting a similar energy shock, because they both relied on the same gas market, adding it was different for the US because of its bigger domestic supply.

He also said the US was experiencing a stronger rebound in demand after the worst of the coronavirus pandemic compared with the UK and Europe.

Last week, the Office for Budget Responsibility, Britain’s fiscal watchdog, predicted that UK household real income this year would contract at the sharpest rate since records began in the 1950s.

Bailey said: “We expect it to cause growth and demand to slow. We’re beginning to see the evidence of that in both consumer and business surveys.” 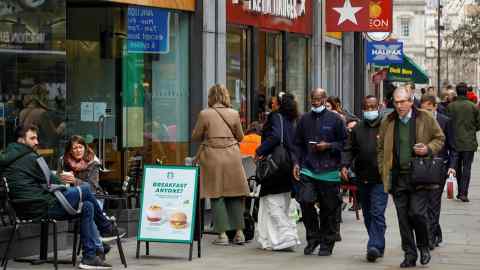 Slower economic growth and higher inflation are often referred to as stagflation: a relatively uncommon situation as prices of goods and services tend to rise most sharply in periods of robust consumer demand and strong expansion of output.

Bailey said the BoE had a variety of monetary policy tools to deal with the current situation, but warned of the challenges given growth and inflation were “pulling in different directions”.

“This is a big trade-off,” he added. “I think it’s the biggest trade-off the Monetary Policy Committee has faced in its now approaching 25 years life.”

Meanwhile chancellor Rishi Sunak told the House of Commons Treasury select committee he was determined to hold down public borrowing and spending, saying he feared that looser fiscal policy could further fuel inflation.

Sunak said a 1 percentage point rise in inflation and interest rates could “wipe out” the headroom he had built into his tax and spending plans in the run-up to the next election.

Russia to press on ‘until all the goals’ are achieved in...