Shortages of staff and supplies are weighing on the recovery of US oilfields, derailing hopes that Texas drillers could unleash gushers of crude to help bring soaring global prices under control.

The Biden administration has pleaded with oil producers to raise output to ease the burden on American motorists, who are paying high prices at the pump following Russia’s invasion of Ukraine.

But the service groups responsible for providing materials, drilling equipment and labour warn that extensive bottlenecks mean this cannot be done overnight.

“You can’t just immediately turn on the taps,” said Ryan Hassler, senior analyst at consultancy Rystad Energy. “It will take some time to reactivate the equipment and staff the crews and bring on the additional sand capacity.”

The US’s shale patch has over the past decade come to be seen as a sort of release valve for global oil supply, capable of rapidly ratcheting output up or down as needed in a relatively short period of time. In previous years this could be done in anywhere from three to six months, say analysts.

But today that timeframe is likely to be double — meaning any significant growth is up to a year away. The reason is a chronic shortage of essential labour and equipment: from drilling rigs and frac sand — used to prop open shale rocks so that oil and gas can flow through — to crews and drivers.

The countdown will not start until investors, who have put the clamps on spending, clear operators to return to growth mode.

The bottlenecks will damp the hopes of the Biden administration that a drilling push by US producers will temper prices. The price of Brent crude, the international oil marker, sat at around $120 a barrel on Friday, up 25 per cent since Russia’s troops invaded Ukraine last month. National average petrol prices hovered just shy of record levels struck in recent weeks, at $4.24.

The lack of frac sand is a key problem. In the Covid-induced downturn of 2020, when oil prices crashed below zero, many sand suppliers went bankrupt and mines were taken offline. Their recovery has been slow and supply is lagging behind demand.

Despite a capacity of about 71mn tonnes a year in the Permian basin of West Texas, under-investment has forced many facilities offline, leaving production at less than 50mn tonnes, well below annual demand of 60mn tonnes. Spot prices have soared from about $20 a short tonne to more than $70 early this year.

“It’s almost like the industry thought we were driving a car with a five-speed transmission — but we went to shift from fourth to fifth gear and that fifth gear just wasn’t there,” said Dirk Hallen, chief executive of Hi-Crush, one of the country’s biggest sand miners.

“All of a sudden now, we’re hitting this kind of supply-demand imbalance. It’s really constraining completions activity,” he added, referring to the process of bringing a well into production after drilling has been completed.

With minimal extra capacity set to be brought to bear in the near term, sand suppliers say they need concrete signs from operators before they can invest in increasing output.

But sand availability is only one of the constraints holding back oil production. Scott Sheffield, chief executive of Pioneer Natural Resources, this month told the Financial Times there was a plethora of supply chain factors impeding his company’s return to growth. “There’s labour shortages, there’s frac fleet shortages, there’s rig shortages, there’s sand shortages,” he said.

Hallen said: “It’s of one of those things where if you fix one bottleneck, you’re on to the next bottleneck. And I think all these things kind of come together to make it really tough to ramp quickly past levels we’re already doing.”

Despite soaring prices, US crude production has yet to recover to its levels before the price crash of 2020. Output sits at about 11.6mn barrels a day, compared with almost 13mn barrels before the pandemic. The US Energy Information Administration expects output to rise to about 12.5mn b/d by the end of the year.

But Sheffield said growth levels were “locked in” for this year at about 700,000 barrels. This could potentially be doubled to bring on another 1.4mn barrels a day in 2023, he said, providing investors agreed and supply chain issues were resolved.

Providers of sand, rigs and labour say there is room for them to increase supply but they need a clear commitment from oil and gas companies before they do so.

It would take time to hire workers to crew drilling rigs and frac operations — and coaxing experienced people back to remote areas such as West Texas could take time.

“There’s a big people problem,” said Raoul LeBlanc, senior analyst at IHS Markit and former director of strategic planning at Anadarko Petroleum. “People got laid off and they moved in 2020 and they live in Montana or Colorado or North Carolina — and you need them back and they need to stay there.”

“Money eventually straightens out that situation,” he added. “But you have to overcome this kind of resistance from people.”

The availability of drilling rigs — rented out from contractors — is also cited by operators as an impeding factor as drillers could take months to bring equipment online that has been left idle since the downturn.

However, Nabors, the world’s biggest driller, dismissed this, saying it had been careful to maintain equipment and could quickly get new rigs into the field.

“If operators come to us — if our customers call us — obviously, we’re going to stand ready to support them with accelerated growth,” said Travis Purvis, vice-president of global drilling operations. “But that does come with a cost. That is the challenge for the operators: to balance their capital and how they’re going to deploy that.” 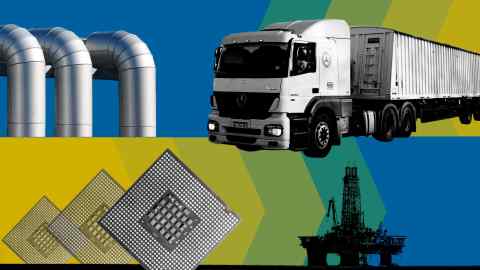 It currently costs around $50 a barrel for companies to break even, according to a recent survey of oil executives. According to IHS estimates, operator costs have already risen by about 15 per cent this year, and a significant drilling campaign would push them up by another 35 per cent next year.

If the supply chain issues are to be overcome and significant growth achieved next year, operators will need to put their money where their mouth is in the next few months, say analysts.

“I think the clock is ticking,” said LeBlanc. “Boards of directors need to make capital allocations . . . to grow in 2023. And they need to make those commitments by May or June of this year.”

Support Ukraine by helping the poorest at home