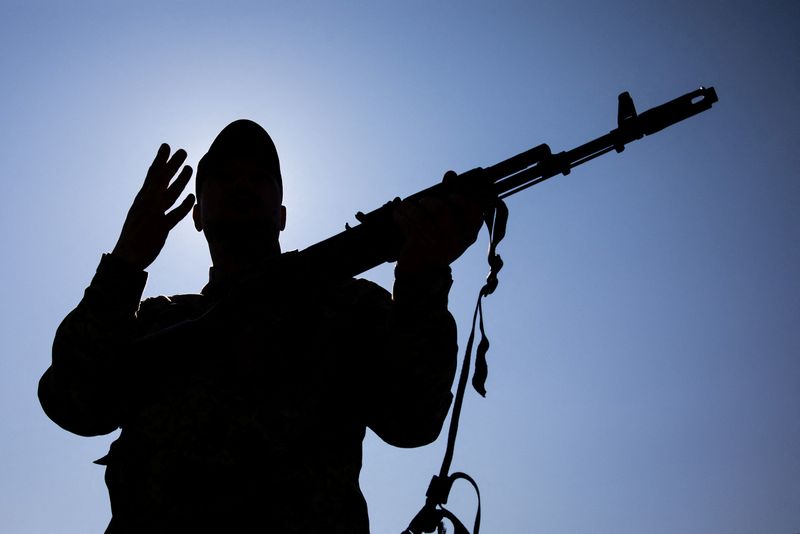 © Reuters. Silhouette of a Kyiv territorial defence member with a Kalashnikov rifle in his hands, as Russia’s invasion of Ukraine continues, in Kyiv, Ukraine, March 25, 2022. REUTERS/Mikhail Palinchak

LVIV, Ukraine (Reuters) – Rockets struck the outskirts of the western Ukrainian city of Lviv on Saturday for what appeared to be the first time since Russia’s invasion, and Russian forces took control of a town where workers at the defunct Chernobyl nuclear plant live.

Intense fighting raged in several parts of Ukraine, suggesting there will be no swift let-up in the month-old war, and U.S. President Joe Biden called Russian President Vladimir Putin a “butcher” after meeting Ukrainian refugees in Poland.

The Kremlin was cited by Russia’s TASS news agency as saying such comments would further damage prospects for mending Russian-U.S. ties.

After more than four weeks of fighting, Russia has failed to seize any major Ukrainian city and the conflict has killed thousands of people, sent nearly 3.8 million abroad and driven more than half of Ukraine’s children from their homes, according to the United Nations.

But two rockets hit the outskirts of Lviv, some 60 km (40 miles) from the Polish border, a city that so far have escaped the heavy bombardment and fighting that has devastated some Ukrainian cities closer to Russia.

Regional Governor Maksym Kozytskyy said five people had been wounded and residents were told to head to shelters after three powerful blasts in mid-afternoon. Reuters witnesses saw black smoke rising from the northeast side of the city and Lviv’s mayor said an oil storage facility had been hit.

Russian troops seized Slavutych, a town where workers at the nearby Chernobyl plant live, the regional governor said.

He said Russian forces had fired into the air and thrown stun grenades to disperse residents who unfurled a large Ukrainian flag and shouted “Glory to Ukraine” in protest. Reuters could not independently verify the reports.

Slavutych sits just outside the so-called exclusion zone around Chernobyl, which was the site of the world’s worst nuclear disaster in 1986.

Ukrainian staff have continued to work at Chernobyl after the plant was seized by Russian forces soon after the start of the Feb. 24 invasion, and the International Atomic Energy Agency (IAEA) has expressed alarm about the situation if workers are unable to rotate.

In the encircled southern city of Mariupol, Mayor Vadym Boichenko said the situation remained critical, with street fighting in the centre. Mariupol has been devastated by weeks of Russian fire.

In an address to Qatar’s Doha Forum, Ukrainian President Volodymyr Zelenskiy compared the devastation in Mariupol to the destruction inflicted on the Syrian city of Aleppo by combined Syrian and Russian forces in Syria’s civil war.

“They are destroying our ports,” Zelenskiy said, warning of dire consequence if his country – one of the world’s major grains producers – could not export its foodstuffs. “The absence of exports from Ukraine will deal a blow to countries worldwide.”

Speaking via video link, he also called on energy producing countries to increase their output so that Russia cannot use its oil and gas wealth to “blackmail” other nations.

Biden saw Ukrainian Foreign Minister Dmytro Kuleba and Defence Minister Oleksii Reznikov in the Polish capital Warsaw in his first face-to-face meeting with top Ukrainian officials since the start of the war.

Biden described Putin as a “butcher” after touring a food kitchen for Ukrainian refugees.

Biden’s visit to Poland was his final stop on a trip to Europe that has underscored his opposition to the Russian invasion, his solidarity with Ukraine and his determination to work closely with Western allies to confront the crisis.

“We are waiting for President Biden to close the sky over Ukraine. Ukrainian warriors can protect our country on the ground, but we can’t close the sky,” said Alla Dyachenko, a chemist from Kyiv who fled to Poland with her daughter.

NATO has ruled out a no-fly zone over Ukraine, fearing it would lead to direct clashes with Russian forces and a Europe-wide escalation.

Zelenskiy pushed late on Friday for further talks with Russia after its defence ministry said a first phase of its operation in Ukraine was mostly complete and that it would now focus on the Donbass region bordering Russia, which has pro-Moscow separatist enclaves.

Russian-backed forces there have been fighting pro-government forces since 2014.

Reframing Russia’s goals may make it easier for Putin to claim a face-saving victory, analysts said.

Moscow has until now said its goals for what it calls its “special military operation” include demilitarising and “denazifying” its neighbour. Ukraine and its Western allies have called that a baseless pretext for an unprovoked invasion.

The United Nations has confirmed 1,104 civilian deaths and 1,754 injuries in Ukraine since the invasion but says the real toll is likely higher. Ukraine says 136 children have been killed.

Footage from Mariupol, home to 400,000 people before the war, showed destroyed buildings, burnt out vehicles and shell-shocked survivors venturing out for provisions. Residents have buried victims in makeshift graves as the ground thaws.

“It’s scary, I don’t know how we’re going to survive,” an elderly woman resident said, declining to identify herself by name. “We’re lying there, hoping they won’t bomb us. Look at how many dead bodies we’ve buried around the building.”

To the north, battle lines near the capital Kyiv have been frozen for weeks with two main Russian armoured columns stuck northwest and east of the city.

The Russian defence ministry said its troops had seized a dug-in command centre in a Kyiv suburb and captured more than 60 Ukrainian servicemen. Reuters could not immediately verify this.

A British intelligence report said Russian forces were relying on indiscriminate air and artillery bombardments rather than risk large-scale ground operations, a tactic the report said could limit Russian military casualties but would harm more civilians in Ukraine.