When Republican congresswoman Marjorie Taylor Greene appeared on conservative radio show Voice of Rural America this week, she launched a full-throated defence of Vladimir Putin and Russia’s invasion of Ukraine.

“You see, Ukraine just kept poking the bear, and poking the bear, which is Russia, and Russia invaded,” the Georgia congresswoman said. “There is no win for Ukraine here. Russia is being successful in their invasion.”

It was hardly the first time Greene had courted controversy. The first-term congresswoman, who has fast emerged as one of the most polarising lawmakers on Capitol Hill, was stripped of her committee assignments last year over her endorsements of QAnon and September 11-related conspiracy theories.

But now Greene, along with a handful of other far-right members of Congress including North Carolina congressman Madison Cawthorn, has prompted fresh outrage by heaping praise on Putin at a time when the overwhelming majority of Americans support Kyiv over the Kremlin.

The lawmakers have also exposed fissures in the Republican party as most opposition members of Congress agree on the need to impose stricter sanctions against Putin and his allies. Greene and Cawthorn were among just eight of 210 elected Republicans who voted last week against a measure to scrap normal trade relations with Russia.

But their actions and comments have also gone beyond breaking party ranks. Last week, Greene appeared to check her mobile phone rather than participate in a standing ovation for Ukrainian president Volodymyr Zelensky when he addressed both chambers of Congress.

Cawthorn arrived late, missing a large portion of the speech, after a viral video showed him telling supporters earlier this month that Zelensky was a “thug”.

“Remember that the Ukrainian government is incredibly corrupt, and it is incredibly evil, and it has been pushing woke ideologies,” Cawthorn said in the clip.

His comments — which have been shown regularly on Russian state television as part of the Kremlin’s information war — were immediately slapped down by fellow Republican lawmakers, including Thom Tillis, the senator from North Carolina, who said on Twitter: “If your comments are being replayed over and over by Russian state propaganda outlets . . . ”

Joni Ernst, the Republican senator from Iowa, used a speech on the Senate floor to single out Cawthorn, saying: “The Ukrainians want to be free. They have been fighting for this for the past 30 years, and to just hand them over to an actual murderous thug called Vladimir Putin is the wrong thing to do. So to my colleague in the House, I would push back and say it’s not Ukraine that is invading Russia, it is Russia that is invading Ukraine.”

Last weekend, Mitch McConnell, the Senate’s top Republican, dismissed Greene and Cawthorn as “a few lonely voices off to the side”, telling CBS News: “The vast majority of the Republican party writ large, both in the Congress and across the country, are totally behind the Ukrainians.”

Public opinion polling suggests McConnell may be right. An Economist/YouGov poll conducted last week showed the same share of Democrats and Republicans — 83 per cent — said they “sympathised” more with Ukraine than Russia. The same survey found that 87 per cent of Democrats said they had an unfavourable view of Putin, compared to 83 per cent of Republicans.

But critics warn that while Greene and Cawthorn may be outliers on Capitol Hill, some blame their far-right rhetoric on the party’s most prominent figure: Donald Trump.

“Trump is primarily the leader in terms of those comments,” said Olivia Troye, a one-time senior adviser to former vice-president Mike Pence who has since become a vocal critic of the previous administration.

“[Greene and Cawthorn] are the Trump wing of the Republican party, hands down. They are his biggest supporters, his biggest allies, the most outspoken,” Troye added. “I am not surprised, being the conspiracy-ascribing people that they are . . . they will lie about everything just to get the sound byte.” 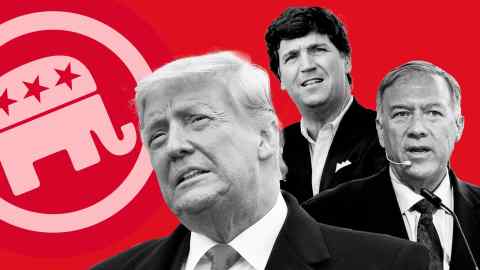 At the outset of the war in Ukraine last month, Trump expressed admiration for Putin, calling the Russian president a “genius”, “smart” and “very savvy”.

But the former president — who is publicly toying with another run at the White House in 2024 — has since made a U-turn, now arguing he would have taken a tougher stance against Russia than the current administration.

“[Trump] is an astute reader of public opinion, and he realised pretty quickly that the public, even his own people, had turned against him,” said Frank Luntz, a veteran Republican pollster. “You see a very different line today than you saw before.”

So far it seems unlikely that either Greene and Cawthorn will follow suit. For one thing, it appears that despite being roundly criticised for their stance on Russia, both lawmakers maintain the confidence of their party leadership.

Asked about Cawthorn’s Zelensky “thug” comments last week, Kevin McCarthy, the top-ranking House Republican, told reporters: “Madison is wrong. If there is any thug in this world, it is Putin.”

But when asked whether he supported Cawthorn’s re-election, McCarthy replied: “Yes.”

Troye said the comments showed Republican leaders were once again at an “impasse”, and questioned whether they would continue to hold the line against their more extreme colleagues.

“It will be interesting to see whether the colleagues across the party will continue to call people out the pro-Putin thing,” she said. “We have been [here] before. Remember January 7, when everyone was angry and upset, and said that should never happen again? And that faded.”

Rana Foroohar and Edward Luce discuss the biggest themes at the intersection of money and power in US politics every Monday and Friday. Sign up for the newsletter here

World Bank: Energy prices will soar over 50% in the largest...