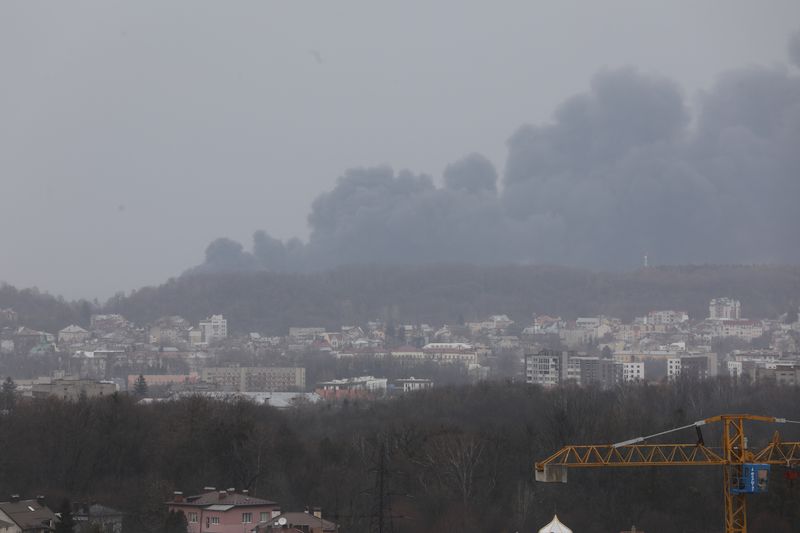 By Natalia Zinets and Mari Saito

LVIV, Ukraine (Reuters) -Four rockets hit the western Ukrainian city of Lviv on Saturday, local officials said, in the most significant attack on the city since the start of the war with Russia.

Lviv, just 60 kilometres (40 miles) from the Polish border, has so far escaped the heavy bombardment and fighting that has devastated some Ukrainian cities closer to Russia since Moscow launched its invasion on Feb. 24.

Governor Maksym Kozytskyy said five people had been wounded after two rockets hit a fuel depot and two others later hit a military factory. Earlier he reported powerful explosions in Lviv’s eastern outskirts from the strikes.

“Stay in shelters! Do not go out into the streets!,” he warned after the first strike.

The rockets fell as U.S. President Joseph Biden, speaking in Warsaw during a visit to Poland, condemned Russian aggression and assured Ukraine of the United States’s unwavering support.

“With today’s blows, the aggressor sends greetings to President Biden, who is in Poland,” Lviv Mayor Andriy Sadoviy said in a televised briefing, saying Russia had fired the rockets from Sevastopol in Crimea which it annexed in 2014.

There was no immediate comment on the Lviv attacks from the Russian authorities, who refer to the invasion as a “special military operation” aimed at demilitarising Ukraine.

The city authorities did not give the exact locations of the strikes, but said they damaged critical infrastructure, set fire to the fuel depot and blasted the windows out of a school building. No residential buildings were hit, according to the mayor.

Reuters witnesses in central Lviv saw heavy black smoke rising from the northeast side of the city and a strong smell of burning filled the air.

Men huddled together on the street to watch a plume of smoke rising behind an apartment block. Most residents appeared to stay indoors, peeking out from behind curtains as others hurried past on the road carrying their bags.

The Ukrainian president’s chief of staff Andriy Yermak said the attacks showed Russia wanted to intimidate Ukraine and the foreign diplomats who have relocated their embassies to Lviv for the perceived relative safety compared to the capital, Kyiv.

“Ukraine should definitely not be intimidated by such crimes of the Russians, and I want to say to my Western partners once again – close the sky, show strength,” he said on Telegram.

This referred to Ukraine’s repeated request for no-fly zone, which NATO has ruled out.

Lviv had a pre-war population of around 717,000, but for the thousands of families fleeing the worst of the fighting in eastern, southern and central Ukraine, it has become either a place of refuge within the country or a transit hub for people leaving the country.

Two weeks ago, a barrage of Russian missiles hit a large Ukrainian base just 25 km (15 miles) from the border with Poland.