In a late-night address to an EU summit, the Ukrainian president thanked Europe’s leaders for adopting “powerful” sanctions against Moscow but urged them to go further and break the pattern of being “a little too late”.

With the invasion in its fifth week, the EU remains torn over whether to adopt additional curbs on Russian energy, tightening what are already the most far-reaching international sanctions ever applied to a major world economy. EU leaders will return to Brussels for a second summit on Friday.

“I want to thank you — you are united, united around us,” Zelensky told the summit on Thursday, as he called on them to fast-track EU membership for Ukraine. “But it was a little late. Because if it had been preventive [action], Russia would not have gone to war.”

During the summit on Thursday night, Poland and the Baltic states stepped up calls for Europe to follow the US in restricting Russian energy trade that is indirectly financing Putin’s war effort. But they faced resistance from other member states wary of drastic steps that would hurt consumers.

Mark Rutte, the Dutch prime minister, said that while everybody wanted to do more on energy there was nothing that could be done “in the short term”. Alexander De Croo, Belgium’s premier, said sanctions “must have a much greater impact on the Russian side than on the European side”. “We don’t wage war on ourselves,” he said.

The discussions came after a historic day of diplomacy in Brussels involving more than 30 world leaders across three summits. Speaking after a meeting of Nato leaders, US President Joe Biden said the “single most important thing” was for the west to remain united, and to show its resolve to Moscow by “increasing the pain” on Russia’s economy.

At the EU summit on Friday leaders are due to discuss options on how to stabilise spiralling energy prices. Southern European nations, led by Spain, are calling for a cap on prices and moves to decouple electricity costs from the elevated gas price. But northern European states are wary of heavy market interventions. One potential alternative is voluntary joint purchasing of liquefied natural gas, as the bloc seeks to curb Russian gas imports by two-thirds this year.

Most of Europe’s LNG is currently imported from the US and Biden has pledged to increase exports by another 15bn cubic metres this year. That almost equals what the EU receives from Russia, the third-biggest exporter of LNG to Europe.

Biden, meanwhile, is due to visit Poland on Friday, where the US has deployed thousands of additional troops in recent months to support the eastern flank of the Nato alliance that is most exposed to the Russian threat.

In his regular nightly address to the nation, Zelensky praised forces defending the nation and “bringing victory closer” by bringing Russia to the negotiating table.

“With each day of our defence, we are bringing the peace we need so much closer,” he said, adding: “It is necessary to seek peace. Russia also needs to seek peace.”

Putin’s faltering invasion has failed to take any major Ukrainian city, but as the war entered its second month Russian forces were fighting in the centre of the besieged port city of Mariupol, and attempting to revive the stalled advance on Kyiv. 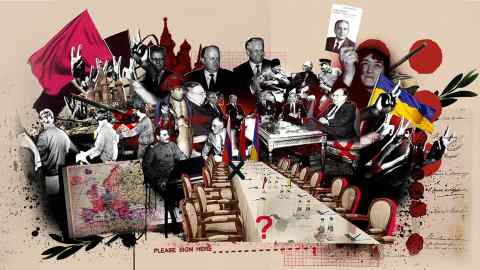 A UK intelligence update on Friday noted Ukraine had been able to “reoccupy towns and defensive positions up to 35 kilometres east of Kyiv” through counter attacks and Russian forces being forced to fall back on “over-extended supply lines”.

Ukraine’s military said Russian forces were regrouping in preparation for a new offensive, and expected attacks on Brovary and Boryspil in a move to envelop Kyiv from the east. Heavy fighting has also continued in Chernihiv, a city to the north-east of Kyiv that Russian forces have attempted to encircle.

Russia was transferring more weapons and military equipment to Belarus and Crimea. “The goal is to make an attempt to prepare and implement offensive actions for the encirclement of the city of Kyiv,” Ukraine’s military said in its update on Friday.

Officials in Mariupol on Friday said, citing eyewitnesses, that about 300 people who were hiding in a theatre that was shelled on March 16 had been killed, according to a statement from the city council. The information could not be independently verified.

Iryna Vereshchuk, Ukraine’s deputy prime minister, said that the “first full-fledged exchange of prisoners of war took place” on Thursday. “In exchange for 10 captured occupiers, we pulled out 10 of our servicemen,” she said.

Earlier this month, Ukraine transferred a group of Russian soldiers in exchange for Ivan Fedorov, the mayor of the Russian-occupied southern city of Melitopol. Fedorov was taken hostage by Russian armed forces after city residents held daily pro-Ukrainian protests against Russia’s invasion.

How to Choose a Crypto Exchange for Trading and Investment?

Deals, debt and dreams: Patrick Drahi’s misadventures in the US