In the days before European banks froze cross-border transactions with Russia, the wife of the oligarch Petr Aven spent time in London on an urgent mission: travelling around cash machines taking out as much money as she could to prepare for what was to come.

Later first the EU and then the UK imposed sanctions on Aven, freezing his bank account and assets, including a top-floor duplex flat in London’s affluent St James’s neighbourhood and an art-filled mansion in a commuter suburb.

The Russian former academic, politician and businessman — worth £4.5bn last month, according to government estimates — now says he does not know if he can pay even the most basic of bills.

His life changed overnight, he says with a snap of his fingers. “Our business is completely destroyed. Everything which we were building for 30 years is now completely ruined. And we have to somehow start a new life.”

It is a life for which he may not be prepared. “Will l be allowed to have a cleaner, or a driver? I don’t drive a car . . . maybe my stepdaughter will drive. We don’t understand how to survive,” he says, speaking at a table laden with fruit and snacks in his London flat, with its double-height dining room.

Aven, who was pictured with President Vladimir Putin in the Kremlin alongside other oligarchs in the days before Russia’s invasion of Ukraine started last month, has been accused by the EU and UK of being close to the Russian president as a director of Alfa-Bank. “Aven is a prominent Russian businessman and pro-Kremlin oligarch,” said the UK’s office of financial sanctions implementation.

The 67-year-old faces an expulsion order in less than 20 days. As the holder of a Latvian as well as Russian passport and a US visa, he has options, but wants to remain in the UK with his wife and eight-year-old.

If he leaves he believes there would be no easy or quick return. “If I go I will never be able to come back,” he says.

Aven, with his business partner Mikhail Fridman, built a banking, financial services and investment conglomerate in the chaotic Russia of the 1990s, centred around their Alfa Group. Much of Aven and his business partners’ wealth came from oil investments in the 1990s they forged into a joint venture with BP in 2003.

After a bruising corporate battle with their partner they divested their TNK-BP stake to Rosneft, the oil and gas group run by Igor Sechin, a close ally of Putin, in 2013.

Nearly $14bn in proceeds was reinvested through LetterOne, the London-based investment group that is co-owned by other partners under sanctions Fridman and German Khan.

Aven is determined to challenge the sanctions against him, which he claims are without foundation. He struggled to find a British lawyer to request the release of sufficient frozen funds to pay for legal advice on how to challenge the order against him.

“British lawyers do not want to work with Russians,” he said, adding that he did not hold much hope for any quick solution. “I was told it’s almost impossible to change sanctions.”

Aven and his partners also have stakes, either directly or indirectly, in Alfa-Bank, Russia’s largest privately held bank now under western debt financing restrictions; the country’s largest supermarket chain, X5; and mobile carrier Veon. He also stepped down as president of Alfa-Bank and had his shares blocked.

His stake in LetterOne has been frozen, with access to the office and people cut off and dividends diverted to the Ukrainian relief effort. “Legally, we cannot touch the business. They are afraid even to meet me personally. We are afraid of authorities very much,” he says.

As with lawyers and other advisers, he says, the response to the fear of sanctions means people are “doing much more than legally they [needed] . . . they’re afraid”.

Although he would make a fortune during the 1990s, he says he is most proud of having been minister for foreign economic relations at the start of that decade, after Yegor Gaidar, who became Boris Yeltsin’s first acting prime minister, asked him to help overhaul the post-Soviet economy.

He became one of the key Russian oligarchs in the Yeltsin era, helping to fund his re-election in 1996.

Aven stresses his compassion for the plight of Ukrainians since the start of the fighting. He rejects the claim that he is close to Putin’s Kremlin, arguing that to do business in Russia requires contact with the president and that when his office calls then there is little choice but to respond.

“That’s very strange, just to be sanctioned because you meet the president. We try to be absolutely out of politics. With Putin I was presenting Alfa Group, not myself at all.”

He is frustrated that he has not been given the chance to defend himself from sanctions. “If the court decides you are corrupt, there is dirty money, absolutely understandable. But this, I just don’t understand. We are prepared to prove everything,” he said.

Aven has been active in the courts in the UK in the past. He was one of four Russian billionaires including Chelsea FC owner Roman Abramovich who sued publisher HarperCollins over a book on Putin by former Financial Times journalist Catherine Belton. Aven brought his claim under data protection law. Belton’s publisher settled with Aven and Fridman. 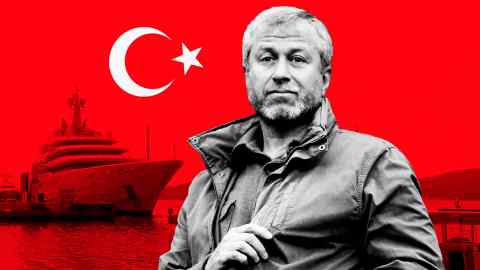 According to the 2019 investigation by special counsel Robert Mueller into Russian interference in the 2016 US presidential election, Aven said that he would meet Putin on a quarterly basis. It added that the oligarch said “any suggestions or critiques that Putin made during these meetings were implicit directives, and that there would be consequences for Aven if he did not follow through”.

Aven now says all he meant was that businesses needed to take Putin’s words seriously in Russia. “He’s president of the country. It’s not directions. This is Russian culture.”

He argues that the current sanctions against prominent Russians will not have any effect on Putin. “It’s understandable. But it’s not fair,” he says of the move to place Russians under sanctions in the wake of the invasion. “[But] I don’t complain when people are dying.”

Aven says he does not own a yacht or a plane. He said he had been in talks to donate his art collection to a leading museum in the UK, which were stalled because he sought to retain some influence over how they were put on display.

Now any donations would be complicated by sanctions. He has stepped down as a trustee of the Royal Academy and a member of the Tate Gallery’s International Council and European Collection Circle of donors.

Aven shrugs at the vagaries of Russian history, which led to the confiscation of property by the Bolsheviks in 1917. He had not expected a century later that it would be the UK that threatened his assets. “I’m very much afraid this attitude will not be forgotten easily.”

He recalls his own family’s persecution during the Soviet Union, with two grandfathers killed by Stalin and two grandmothers imprisoned for years in the Gulag.

One of them later offered some stark advice: “Someday, they will come after you. So be sure that you have been prepared. Your nice life will end someday.”

What is the TikTok trend de-influencing

Environmental concerns are on the rise across the world–but Americans’ support for climate action...

admin - January 31, 2023
0
Back in 2006, Al Gore’s documentary An Inconvenient Truth became a cultural phenomenon. It also sparked a change in people’s minds and attitudes...

admin - January 31, 2023
0
Remember when every narrative, opinion, or news cycle was saturated with claims of Russian propaganda or ‘bots’? It was everywhere, particularly if it...