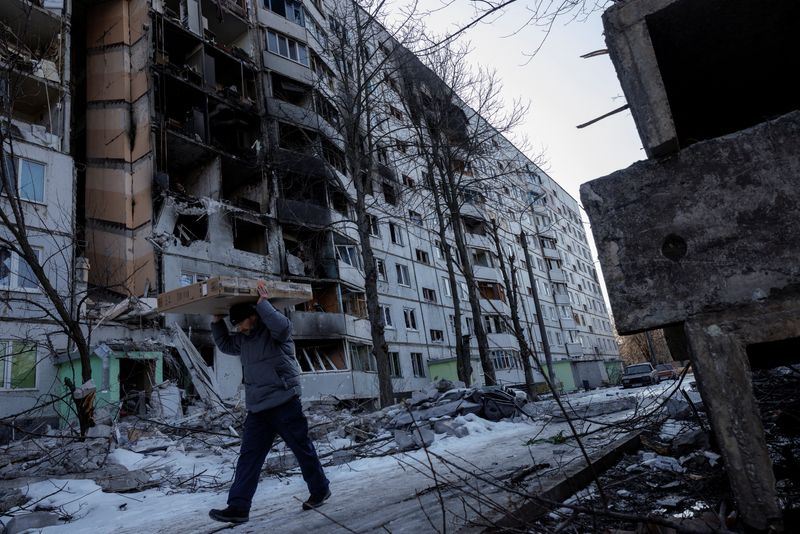 © Reuters. A man carries belonging out of a house that was hit by bombing in a northern district of Kharkiv as Russia’s attack on Ukraine continues, Ukraine, March 24, 2022. REUTERS/Thomas Peter

LVIV/MARIUPOL, Ukraine (Reuters) -President Volodymyr Zelenskiy said on Friday that Ukrainians “need to achieve peace” and halt Russian bombardment that has forced millions to flee to countries like Poland, where U.S. President Joe Biden is due to witness the crisis first hand.

On the heels of leaders’ summits in Brussels that aimed to show a united Western front against Russia’s month-long invasion of its neighbour, Biden goes to Poland on Friday to meet experts involved in the refugee response.

Western leaders denounced Moscow’s invasion as barbaric and promised new military and humanitarian aid after Thursday’s talks in Brussels, while the United States and Britain expanded sanctions to new targets.

Japan followed suit on Friday, saying it would ratchet up its sanctions and strip Russia of most favoured nation trade status. Australia sanctioned Russian ally Belarusian President Alexander Lukashenko and members of his family, and 22 Russian individuals, who it called “propagandists and disinformation operatives.”

The Russian invasion, which President Vladimir Putin calls a “special operation”, has killed thousands of people, sent 3.6 million abroad and driven more than half of Ukraine’s children from their homes, according to the United Nations.

“Every day we defend, we get closer to the peace we need so much … and you can’t stop for a minute. Because every minute is about our destiny, it is about our future. About whether we live.”

The new Western aid stopped short of Zelenskiy’s pleas for a full boycott of Russian energy and a no-fly zone over Ukraine where Moscow’s bombs have blasted some residential areas into wastelands.

But in a significant escalation in the lethal aid on offer, a senior U.S. administration official said the United States and its allies were working on supporting Ukraine with anti-ship missiles that could threaten Russian operations in the south.

Ukraine said its forces destroyed a large Russian landing ship at the southern port of Berdyansk. Video footage showed fire and an explosion, and two vessels, one of which appeared to have been damaged, were seen sailing away as a third burned.

Russia did not respond to requests for comment and Reuters could not confirm if it was the Orsk landing ship on fire.

Russia has so far failed to capture any major Ukrainian city in an assault it says is not designed to occupy territory but to destroy Ukraine’s military capabilities.

Russia’s shelling has been relentless but its armoured columns have barely moved in weeks, stalled near the capital Kyiv.

Ukraine says Russian forces have taken heavy casualties and are low on supplies, and U.S. officials told Reuters that Russia is suffering failure rates as high as 60% for some of its precision-guided missiles.

With stocks of precision-guided munitions running low, Russian forces were more likely to rely on unguided bombs and artillery, Under Secretary of Defense for Policy Colin Kahl said.

“We will find every Russian soldier who commits war crimes, along with their accomplices … do not think that your surnames are unknown to us. No one will be able to escape punishment,” Vereshchuk said.

Russia says its aims in Ukraine include capturing what it regards as dangerous nationalists. It also says that the NATO military alliance’s eastern expansion threatens Russia’s security.

Weeks of on-and-off peace talks have failed to reach a breakthrough. Meanwhile, civilians have come under heavy Russian aerial assaults and artillery strikes.

In the besieged southern port of Mariupol, which lies between Russian-annexed Crimea and eastern areas held by Russian-backed separatists, thousands are in basements with scant water, food, medicine or power.

One woman waiting in line to receive food supplies in the city told Reuters her diabetic husband had slipped into a coma and died before the aid arrived. He was buried in a flowerbed.

“We are planning on leaving but it’s very difficult at the moment,” the woman, who gave her name as Alexandra, said. “I can’t leave my husband in a flowerbed … And then we have nowhere to go.”

Ukraine’s armed forces chief of staff said on Thursday Russia was trying to resume offensives to capture Mariupol as well as Kyiv, Chernihiv, Sumy and Kharkiv.

Still, Ukraine says it is shifting to the offensive and has pushed back Russian forces in some places.

Civilians have managed to flee through humanitarian corridors negotiated by Ukrainian and Russian officials. Over 3,300 escaped on Thursday, officials said.

Poland, home to the biggest Ukrainian refugee population in the region even before the war, has taken in more than 2.1 million people. Public services are struggling to cope.

During his visit to Poland, Biden will meet with President Andrzej Duda to “thank him for everything the people of Poland are doing” and to discuss a coordinated humanitarian response, White House spokesperson Karine Jean-Pierre told reporters.

Lavrov, at the UN, pledges ‘full protection’ for any territory annexed by Russia By Reuters

The world’s most wonderful libraries: the readers’ picks