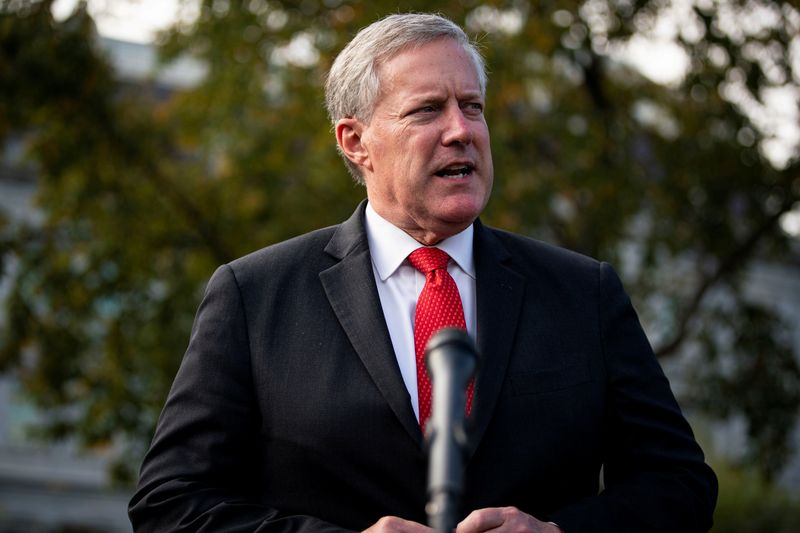 (Reuters) -Virginia Thomas, the wife of conservative Supreme Court Justice Clarence Thomas, urged former Trump White House chief of staff Mark Meadows to work to overturn the results of the 2020 election in a series of text messages, the Washington Post and CBS News reported on Thursday.

The messages, sent in the weeks following the Nov. 3 presidential election, show that Thomas advised Meadows to “make a plan” and “release the Kraken” in a bid to preserve Donald Trump’s presidency, the Post and CBS News reported.

Virginia Thomas, a conservative activist and attorney, could not immediately be reached for comment.

Now-President Joe Biden was projected to win the race on Nov. 7, 2020.

“Sounds like Sidney and her team are getting inundated with evidence of fraud. Make a plan. Release the Kraken and save us from the left taking America down,” she said in one of 29 messages shared between the two, according to the Post.

Sidney Powell, who represented Trump’s campaign when he sought to overturn the election result, filed lawsuits challenging counts in multiple states in support of Trump’s false claims of widespread election fraud. She had previously vowed to “release the Kraken” to expose the alleged fraud, a reference to the sea monster of Scandinavian folklore.

The messages were handed over to the congressional committee investigating the Jan. 6 attack on the U.S. Capitol, according to the Post and CBS, who said, without elaborating, that they had obtained copies of the messages.

Reuters could not independently verify the reports.

A spokesperson for the Jan. 6 committee declined to comment.

Reuters sought comment from Meadows at the Conservative Partnership Institute, an organization that helps elect conservatives to office where Meadows now serves as partner, but was unable to immediately reach him. An attorney for Meadows did not return a request for comment.

The messages do not directly reference Thomas’s husband or the Supreme Court, according to the Post.

Trump’s campaign distanced itself from Powell after she claimed without evidence at a Nov. 19, 2020 news conference that electronic voting systems had switched millions of ballots to Biden.

The news comes almost a week after Justice Thomas was admitted to a Washington hospital. The status of Thomas’s health was not immediately clear.

Kids get Long COVID, too. Experts are racing to understand it