There was a sad little moment in the middle of last year when the chief executive of Shopify, Tobias Lutke, fed up with all the social justice demands being made of his firm, snapped.

Shopify, he said in an email to staff, “is not the government. We cannot solve every societal problem here.” I might come back to the email another time (it’s good on where the limits are when it comes to the responsibilities of a company to its employees’ wellbeing).

But the most interesting bit about it is the boss of the ecommerce company’s apparent belief that governments can solve societal problems.

This brings me neatly to poor Rishi Sunak, a man who has at his disposal all the apparatus of government and a large money printing machine to feed it with, but yet appears able to resolve almost none of our difficulties.

I say poor Sunak because while the press have been tough on him this week, he can’t really cop much of the blame for where we are today. He can’t be blamed for the long period of low inflation that made our central banks so complacent about inflation — they still appear to think that they had a hand in keeping inflation low when it seems more likely that was a function of globalisation and technology.

He had no hand in the normalisation of quantitative easing as a policy, no responsibility for the low interest rates that distorted markets or the out-of-control ESG boom — itself a function of low interest rates — that starved big energy of capital and added to the supply crunch.

Nor was it him who decided that locking down the world for years was the correct response to the pandemic — or that China should pursue a lockdown-based zero Covid policy indefinitely, slamming global supply lines indefinitely.

He also did not choose war — and there is no such thing as a non-inflationary war. This is not to absolve him of all responsibility, of course. The £400bn spent during the pandemic, the demand boom that it has given us and the creation of the illusion that in extremis the government can come up with the cash to solve every problem all rest at his door.

But the key point is that all these things — the things that have given us CPI at 6.2 per cent and RPI at 8.2 per cent and the chance that both may go into double digits this year — are too global to have anything do with him. This is why he has no hope of fixing them, in the short term at least.

So to poor Sunak’s attempts to cover up this impotence. There was one bit that you could, if you feel like, be positive about. The great fracturing of supply chains should — if properly incentivised — accelerate the reshoring of all manner of manufacturing that had already begun pre Covid, as costs and risks rose.

The Spring Statement expanded R&D tax reliefs to take in sectors using pure mathematics (AI robotics and quantum computing should benefit). It reiterated a plan to keep the annual allowance for capital expenditure at £1,000,000 (from £200,000) until 2023. And it announced a slew of reviews into other business tax relief regimes — all seemingly with a view to make companies want to spend money on capital expenditure and R&D in the UK.

Much of this was relatively detail free. But it is at least possible that if he gets it right it might help businesses adapt to our new world slightly more easily than otherwise. 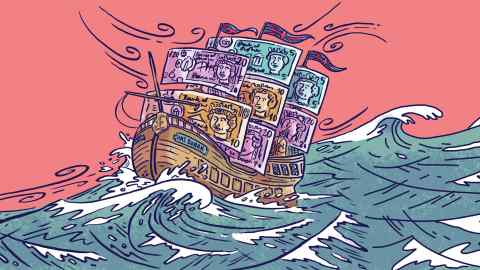 Beyond that however the performance was all pretty pointless. You got your 5p a litre off fuel — which you probably won’t notice given the huge volatility in the market. You got a rise in the national insurance threshold from £9,880 to £12,570 (where income tax starts). You also got the announcement that you might get a cut in the basic rate of income tax to 19 per cent in 2024 — a date that no one who is worrying about their purchasing power falling 10 per cent this year is interested in now.

Say hello to the biggest fall in living standards since the mid 1950s, when comparable records began. We are still treating the young badly — I have no idea why — and shifting the tax base from income tax, which pensioners pay, to NI, which they do not, unless the shifting of the NI threshold to match the income tax threshold is a first step to merging the two.

Meanwhile, we use soaring RPI instead of the more moderate CPI to calculate student loan repayments and boost the money these young people hand over. These are an income tax by another name as well.

Pensioners don’t get away scot free. The new health and social care levy will apply to dividends but the 2024 tax cut will not, says accountancy firm RSM. So if you get dividends of £50,000 a year, you’ll be £440 worse off in April 2024 than you are now.

We are still treating the young badly — I have no idea why — and shifting the tax base from income tax, which pensioners pay, to NI, which they do not

But you get the picture — not much has changed as a result of all Sunak’s talking and tweeting. All that stuff about “we’re cutting taxes for hard working people”.

It was a bit all hat, no cattle. In the end this might make some sense. If you know you can’t fix something, why try — even if the optics of doing so might be better than the optics of not?

Instead, why not privately note that the nation’s finances aren’t in bad shape: debt to GDP levels is falling and the cost of servicing that debt is still low by historic standards. And hang on to any fiscal firepower you have to persuade voters to let you keep your job at the next election. Although why anyone would want a job that mostly involves being expected to fix the unfixable, I can’t imagine. Tobias Lutke wouldn’t do it.

Bill Gates has big plans for giving away his wealth

‘I say no’: meet Masayoshi Son’s financial guru at SoftBank