Rishi Sunak saved his biggest Spring Statement crowd-pleaser until the end: a promise to cut the basic rate of income tax by 1p in the pound in April 2024, conveniently a few weeks before many Tory MPs expect to face a general election.

All fiscal events are described as “highly political”, but the sight of Sunak, the chancellor, in the midst of an economic crisis, announcing a tax cut in two years’ time did not look merely political. “It looked desperate,” said one senior Tory MP.

His postdated tax cut was — more than any other announcement — confirmation of the grim political and economic situation in which he finds himself.

On the most basic level, Sunak was anxious to deliver some good news at the end of a statement dripping in red ink, downgraded economic forecasts and warnings of soaring inflation.

Many Conservatives, searching for some evidence that Sunak is actually a tax-cutting chancellor after years of Covid-enforced tax rises, cheered him enthusiastically.

Richard Holden, MP for North West Durham, said the statement was “well thought through” and would help working people most affected by the cost of living crisis.

George Osborne, former Tory chancellor, tweeted: “Rishi Sunak has given back to the Conservative government a long-term economic plan based on controlling spending, reducing the deficit and debt and cutting taxes.”

But pre-announcing tax cuts is rare. Doing it at a time when, as Sunak himself admitted, “we should be prepared for the economy and public finances to worsen — potentially significantly”, seemed heroically optimistic.

David Gauke, a former Treasury minister, said that given the uncertainty it was “very curious to announce a tax cut in two years’ time unless your priority was to please low tax Conservative MPs and commentators”.

Another former Treasury minister suggested Sunak had made his move to “instil some spending discipline in the cabinet”.

In other words, Sunak would in future be able to warn ministers — including, perhaps, Prime Minister Boris Johnson — that if they wanted to spend more money before the election, the tax cut would have to go.

But some Tory MPs believe the tax cutting promise was designed to divert attention from the fact that Sunak’s Spring Statement contained some highly awkward facts about the government’s record on tax.

The Office for Budget Responsibility, the independent fiscal watchdog, noted that Sunak’s announcement of permanent tax changes only offset around a sixth of the tax rises introduced since he became chancellor in February 2020.

Labour said the chancellor had put up taxes 15 times, largely to deal with Covid, while the OBR said the tax burden was rising from 33 per cent of gross domestic product in 2020 to 36.3 per cent in 2027, its highest level since the late 1940s.

Even Sunak’s announcement that he was equalising the national insurance threshold with the £12,570 starting point for income tax was portrayed by Labour as evidence of “Alice in Wonderland” economics.

Sunak said the move would give a £6bn tax cut to 30mn workers, helping particularly those on low pay. But the change, effective from July, comes three months after the chancellor increased national insurance rates by £12bn.

Rachel Reeves, shadow chancellor, joked: “Alice asks the chancellor: ‘When did lower taxes mean higher taxes?’ Has ‘down’ become the new ‘up’?”

Reeves said that, while Sunak’s hero was Margaret Thatcher’s tax-cutting chancellor Nigel Lawson, the chancellor was more like “Ted Heath with an Instagram account” — a reference to the 1970s Tory prime minister, who battled economic crises.

Sunak, who knows he has to burnish his tax-cutting credentials if he is ever to succeed Johnson as prime minister, will not have found that joke particularly funny.

Even though he claimed his promised income tax cut from 20p to 19p in the pound would be affordable in 2024, and that he had built a safety margin into his plans, many voters may not feel better off.

Paul Johnson, head of the Institute for Fiscal Studies think-tank, lamented the fact that Sunak was increasing national insurance — which hits workers and the young — while promising to cut income tax, which also covers share and property income.

Paul Johnson also noted that the promised 2024 income tax cut and an increase in the NI threshold would be funded by workers dragged into higher tax bands by Sunak’s freeze on income tax thresholds and allowances.

The prevailing mood among Conservative MPs after Sunak’s statement was that he had done the “bare minimum” to cushion the cost of living crisis that is engulfing the country and will have to do more in the autumn.

Sunak knows that. Indeed, the fact that the chancellor has banked most of the fiscal good news he received — higher than expected growth and tax revenues this year — is a sign of him building up a war chest for the autumn. 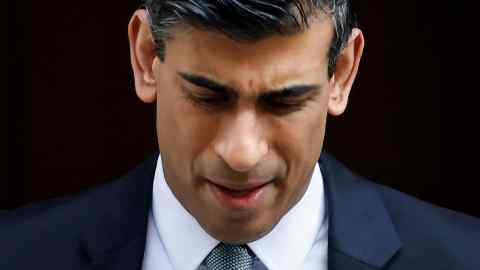 At that point the chancellor will be under huge pressure to come up with an even bigger “cost of living” package, with speculation the price cap on domestic energy bills could rise from £1,277 now to £2,800 in October.

With debt interest payments increasing fourfold to £83bn next year — more than the combined budget for schools, the Home Office and Ministry of Justice — Sunak knows his room for manoeuvre is limited.

He threw out a bit of red meat to Tory MPs, saying that he was able to cut from 5 per cent to zero the value added tax rate on domestic energy projects “thanks to Brexit”.

He added he would take the fight to Brussels to ensure Northern Ireland was also able to benefit — the Northern Ireland protocol does not allow zero rates. Some Tory MPs sensed Sunak positioning himself for a future leadership bid.

But Brexit is now in the rear-view mirror. Sunak’s chances of moving next door to Number 10 may lie in his ability to not just promise tax cuts — but to deliver them on a sustained basis.

admin - February 9, 2023
0
People are uneasy about the debt ceiling fight. Many think it's unhealthy and a sign of poor fiscal management, and they are right....