Boston Consulting Group, one of the world’s largest corporate advisers, has sued the video game retailer and meme-stock archetype GameStop over what it called $30mn in unpaid bills.

The consulting group said in a complaint filed in US federal court that it began working with GameStop in 2019 to help “enable a corporate transformation” that would improve its flagging fortunes. But the retailer failed to take actions necessary to implement the turnround plan, then “refused to pay significant amounts of BCG’s fees”, the complaint alleged.

GameStop last year became a darling of retail traders who organised on social media platforms to drive up its share price, inflicting billions of dollars of losses on hedge funds that held short positions in the company. At one point GameStop’s shares had risen almost 2,000 per cent.

After BCG’s lawsuit, members of the r/WallStreetBets and r/Superstonk groups on the Reddit social media platform cheered on the company. “I applaud GME [GameStop] for looking out for my 28,800 shares,” one Reddit user wrote.

BCG said that GameStop was floundering when it took on its assignment, with shares that had fallen to $3.32 by August 2019 from a previous high of $55. In the first quarter of 2020 it was one of the most heavily bet-against companies listed in the US.

The consultancy’s filing in the US district court of Delaware did not mention how the large short positions, or bets on a share decline, would soon catalyse the spectacular reversal in GameStop’s stock. The extreme valuation boost enabled GameStop to raise over $1bn in capital by selling more shares.

“GameStop ended last year with $1.3bn in cash and cash equivalents. They can easily afford to pay a $30mn consulting fee,” said an analyst who covers the retailer. “For GameStop to stiff them, it’s trifling. They’re just being petty and it’s not a good look.” 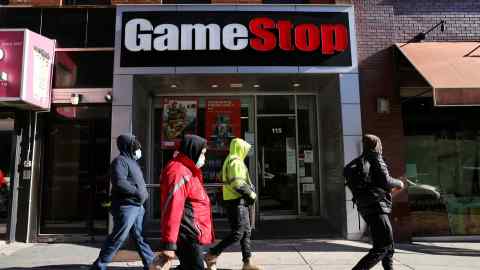 BCG declined to comment. GameStop said: “We do not believe it is in our stockholders’ best interests to pay the tens of millions of dollars sought by BCG, especially given their seemingly meagre impact on the company’s bottom line. We will fight this suit and are proud that GameStop no longer utilises the likes of BCG for any services.”

GameStop’s shares closed up 14.5 per cent at $141 on Wednesday after rising 30 per cent on Tuesday. So far this week the company has experienced its largest price jump since March 2021.

Wednesday’s share price rise came after a securities filing showed that Ryan Cohen, GameStop chair, had increased his stake to almost 12 per cent, purchasing 100,000 additional shares between $96 and $108 each.

Composite materials have made Artemis possible. Here’s how innovation is transforming...