A leaked security co-operation agreement has revealed that the Solomon Islands could allow Chinese soldiers and police to be deployed in the Pacific nation, which might also resupply People’s Liberation Army vessels.

The draft agreement, which was leaked on Thursday and which two people with direct knowledge of the document said was authentic, will give China a military foothold in the Pacific Ocean and alarm the US and its allies.

The agreement included clauses that PLA vessels would be protected by Chinese security personnel when they docked in the Solomon Islands. Chinese forces could also be called upon to control “social unrest” in the country and to protect Chinese personnel and projects.

Last year, China sent 10 police officers to the Solomon Islands after riots in the capital Honiara, challenging Australia’s traditional role as a provider of security assistance to the volatile country.

Karen Galokale, permanent secretary for the Ministry of Police, National Security and Correctional Services in the Solomon Islands, told Reuters that the military agreement would be sent to the island nation’s cabinet for discussion.

The draft was leaked by an aide to Daniel Suidani, premier of Malaita, the Solomon Islands’ most populous province, who was fiercely critical of Prime Minister Manasseh Sogavare’s decision to switch diplomatic relations from Taiwan to China in 2019.

Security analysts said the draft suggested that the Chinese navy could be granted a permanent presence in the South Pacific, an area of growing strategic interest for Beijing, where its increasing military presence is watched with concern by the US, Australia and New Zealand.

The US said in February that it would open an embassy in the Solomon Islands as part of its campaign to counter Chinese influence in the Pacific, while Australia has increased its economic activity in the region in recent months with countries including Nauru where it has agreed to provide financing for a new airport.

A spokesman for the Australian government said on Thursday that “members of the Pacific family are best placed to respond to situations affecting Pacific regional security” following the leak of the draft agreement. “We would be concerned by any actions that destabilise the security of our region.”

Last September, Australia infuriated China when it formed a military partnership known as Aukus to build nuclear submarines with the US and the UK. The pact was designed to counter Beijing’s military assertiveness in the Asia-Pacific region.

Beijing’s security pact with Honiara comes in the wake of greater Chinese economic engagement with the island nation. 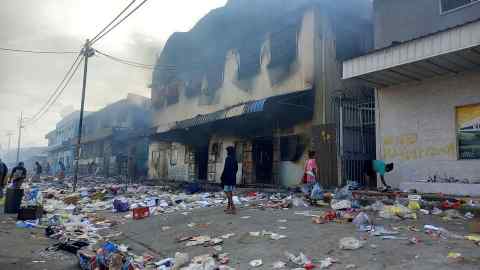 Shortly after Beijing established diplomatic ties with the Solomon Islands three years ago, a Chinese company negotiated a 99-year lease of Tulagi, an island with a natural deep seaport. The deal was blocked by Honiara but was seen by US and Australian officials as an attempt to secure a location for a potential naval base in the Pacific at a time of rising tension in the region.

Analysts wondered if the new draft deal would resurrect that attempt. “It raises the question whether the Chinese military could set up a logistics base there,” said Anna Powles from the Centre for Defence and Security Studies at Massey University in New Zealand.

There was also concern about the vague language in the draft agreement about which kinds of forces China could send and for what purpose.

A Solomon Islands politician critical of the government said the proposed deal would not bolster the country’s security. “It benefits only the government because they can call the Chinese in,” he said, “but we fear that it could undermine stability here.”

The Tate ruling is a victory against rubbernecking

Investigation needed to hold those behind UK pension crisis to account