The Telegraph’s latest hatchet job on El Salvador’s bitcoin strategy is right on the money. In a hilarious twist of events, mainstream media’s latest attack on the volcano bonds makes the case for bitcoin in all its glory. Everything that the article “The world should fear El Salvador’s bizarre Bitcoin experiment” implies is exactly the reason people should support El Salvador’s boldness.

Where is the disconnect, though? The Telegraph can explain that. Speaking about the possible effects of hyperbitcoinization, they say:

“It could certainly result in the panopticon being at least partially blinded. Your view on whether this might usher in a libertarian utopia or archaic free-for-all will largely depend on whether you think the US is a quasi-imperialistic bully or broadly a force for good.”

The funny thing is, The Telegraph admits that the US has abused the “exorbitant privilege” that the dollar’s status as the international reserve currency brings. And they even cherish it. What The Telegraph doesn’t do, though, is talk about inflation, and how the last few years’ rampant dollar printing hurts the whole world.

What Does The Telegraph Think About The Volcano Bond?

The author sets the stage for the article by describing the volcano bond launch. He uses derogatory language but gives a fair look at an admittedly ridiculous scene. “The central American country is poised to launch its first $1bn so-called “volcano bond” in the coming days,” The Telegraph says.

As early as this, we start agreeing with the article’s message. “Sovereign debt issuance is rarely this interesting.” And he’s right. It rarely is. Then, breaking all conventions, The Telegraph admits that the US uses the dollar as a weapon:

“The US dollar is, to all intents and purposes, the world’s currency of choice. It dominates global central banking reserves, trade finance and bank-to-bank payments and is used in some 88pc of all foreign exchange transactions.
This means the US Treasury can conscript foreign banks to do its bidding on pain of being shut out of the dollar clearing system, which no lender could survive.”

Somehow, The Telegraph doesn’t see “conscript foreign banks to do its bidding on pain of being shut out” as being malicious. We agree on everything else, though. And, to top it all off, the author beautifully states bitcoin’s value proposition:

“Cryptocurrencies are one means to undermine the power of the dollar. They allow online payments between two parties without the need for a financial intermediary. This opens the possibility of financial products and services that are accessible to all and controlled by none.”

Of course, “accessible to all and controlled by none” seems to be a bad thing for The Telegraph for some reason. Other than that, we’re in full agreement with this part of the article. 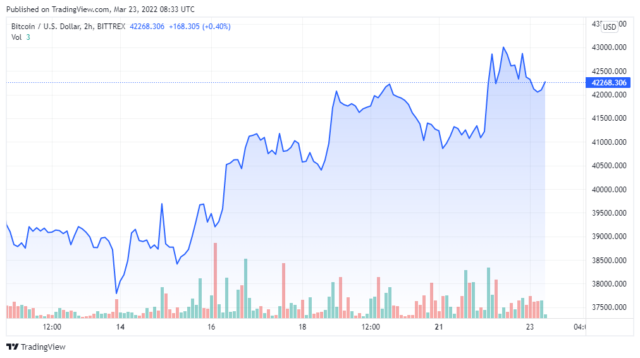 An Attempt To Throw El Salvador Under The Bus

No hatchet job would be complete without an attack on El Salvador as a sovereign country. Here, we lose our connection to the author. He tries to imply that escaping the US dollar hegemony is somehow inherently bad. Doing it, he puts cryptocurrencies and other fiat currencies in the same bag.

“It also places the central American country in some slightly dubious company. India is said to be considering a rouble-rupee exchange that would allow it to buy oil from Russia on the cheap and Saudi Arabia is thinking about pricing some of its crude in yuan.”

Isn’t the author mixing his metaphors here? Wasn’t this a critique on bitcoin adoption? In any case, he is still bullish on a dying horse. “There is very little chance of the dollar losing its crown as the global currency of choice any time soon,” he predicts. Depending on what “any time soon” means to him, he might be right. The article’s closing remarks make it seem like The Telegraph is even more bullish on bitcoin:

“However, each new initiative like El Salvador’s bitcoin bond could chip away at the greenback’s supremacy a little, potentially making the world that bit harder to police and a touch more dangerous.”

Invest in Volcano Bonds 🌋 and “make the world that bit harder to police”!#Bitcoin fixes colonialism! https://t.co/Iqr0mVvBAt

President Bukele, a social media expert in his own right, answered The Telegraph’s criticism without mercy. “Invest in Volcano Bonds and “make the world that bit harder to police”! Bitcoin fixes colonialism!” Enough said.

admin - February 8, 2023
0
Join Our Telegram channel to stay up to date on breaking news coverage Some have called fetch.ai one of the most amazing cryptocurrencies of...

Crypto Reacts: Was The Ethereum Merge a Success Or A Mess?

🔴 Russia Jumps On The Ban-Wagon