The US said it had made a formal determination that Russia’s military has committed war crimes in Ukraine, pointing to atrocities including “indiscriminate attacks deliberately targeting civilians” carried out during Vladimir Putin’s invasion.

Antony Blinken, secretary of state, said the Biden administration had made the assessment based on a “careful review” of information from public and intelligence sources. He added it would be up to a court of law to determine “guilt in specific cases”.

Blinked noted in particular a strike on a theatre in Mariupol that was clearly marked with the Russian word for “children” as well as an attack on a maternity hospital that killed a pregnant woman and her child. The US will continue to gather information on attacks and share them with allies and international institutions, he added.

The US made its formal assessment a week after president Joe Biden called Putin a “war criminal” in his sharpest rebuke yet of the Russian president.

The accusation of war crimes came as Biden travelled to Europe to meet Nato and G7 leaders in Brussels to discuss the allied response to the war.

The US is pressing Europe to join it in warning China not to provide military assistance to Russia or help Moscow evade sanctions, as the west’s approach to Beijing emerges as a crucial area of focus during Biden’s forthcoming talks with European leaders.

Speaking to reporters on Air Force One ahead of the president’s arrival in Brussels, Jake Sullivan, Biden’s national security adviser, said Washington had not seen evidence of Beijing aiding Russia’s military. The US hopes it can agree a position with European allies with regards to Beijing ahead of an EU summit with China next week.

“We’ve sent a clear message to China about the implications and consequences of any . . . provision of military equipment,” said Sullivan. “We expect that [European leaders] will convey similar messages in their dealings at the highest levels with the Chinese government.

“The same thing goes for systematic efforts to undermine, weaken or circumvent the sanctions regime that we have put in place,” he added.

Biden’s national security adviser also noted that the G7’s sanctions enforcement initiative, which aims to curb sanctions busting, would apply to China in the same way it does for “every significant economy”. 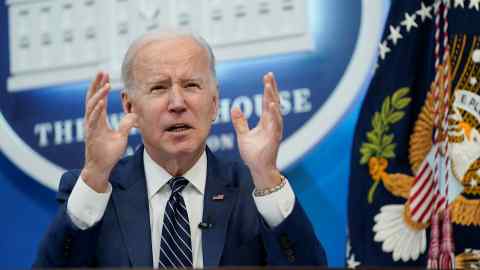 US and EU officials have said battling sanctions evasion and loopholes in existing measures would probably be the primary focus of any joint action this week.

However Sullivan added that the US would announce a new package of individual sanctions targeting additional Russian officials and oligarchs.

The US is not pressing the EU to follow it in banning Russian energy imports but is expected to agree on a joint strategy to reduce Europe’s dependence on Russian gas.

EU looks to Israel as it battles Russian energy ‘blackmail’