The Taliban have reversed a decision to allow teenage girls back to secondary school despite repeated assurances they could resume classes from Wednesday, sparking international condemnation and leaving desperate students stranded outside campuses.

Schools were scheduled to reopen in Afghanistan on Wednesday for the new academic year. Girls have been allowed to attend primary school but the Taliban had said students from Grade 7, or about age 13, would be allowed to resume classes for the first time since the militants seized power last August.

But the Taliban made a U-turn on Wednesday morning, announcing that girls’ high schools would remain closed “until further notice”, according to the official Bakhtar News Agency, which said girls’ uniforms were not in compliance with Islamic law.

The future of girls’ education has become one of the most contentious issues in Afghanistan since the Taliban returned to power. The hardline Islamist group banned women from studying or working when they previously ruled the country in the 1990s, part of a series of policies that made them international pariahs.

The Taliban claimed to have dropped their objection to girls’ education, arguing they had reformed in order to gain international recognition and rebuild financial ties with the west.

Soon after taking power the Taliban said they would defend women’s rights “within the framework of Islamic law”. In parts of the country, women have been allowed to continue working in some areas such as healthcare.

But diplomats and analysts have remained deeply sceptical, suggesting that there were unresolved rifts within the group and some senior Taliban leaders still opposed girls’ education.

Wednesday’s reversal was widely condemned internationally. The UN said it “deplores” the Taliban’s ban and Rina Amiri, US special envoy to Afghanistan, wrote on Twitter that the decision “not only weakens confidence in the Taliban’s commitments but further dashes the hopes of families for a better future for their daughters”.

The move left students, many of whom had already arrived for what they expected to be their first day at school, stunned. 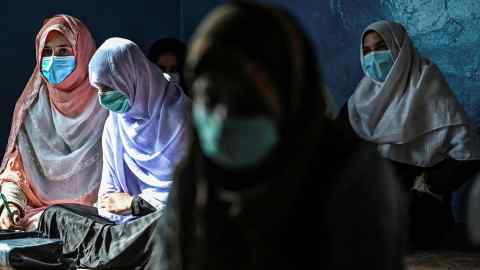 One student in Kabul said she cried when she heard yesterday that schools were reopening. “But today I am really upset. I can’t say anything — what can we say? What can we do?” she told Tolo News, local media group, outside her school. “It has been 186 days that we haven’t been to school — why? What are we guilty of?”

Women have faced widespread harassment and discrimination at the hands of Taliban officials and militants, with activists arrested and others fleeing the country.

Afghanistan has been plunged into a devastating financial and humanitarian crisis since the Taliban re-took power. The foreign aid that made up about 80 per cent of the previous government’s budget was suspended and aid agencies say 98 per cent of Afghans do not have enough food and millions are at risk of starvation.

China says carried out drills near Taiwan By Reuters

German beer drinkers face higher prices at the bottom of the...